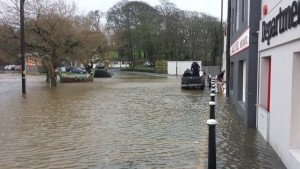 In his review of 2015, the Bishop of Elphin has said the two major challenges that the country faced in the past year, and which remain unresolved, are the homelessness crisis and the problem of flooding.

The challenges on the international scene mirrored the ones nationally, Bishop Kevin Doran said, as he referred to the refugee crisis and the on-going challenge of protecting the earth’s future.

Because the refugee crisis has affected Europe, this time “it is not so easy to be indifferent”, Bishop Doran acknowledged.

In his message, Dr Doran continued, “Today, we acknowledge that, as a society, we have a lot to do.”

But he also underlined that it is good to celebrate how much has been achieved during the past year, through the hard work of the naval service, the civil defence, the Red Cross and so many men and women both those who are working for local authorities and those who serve in a voluntary capacity.

The Bishop of Elphin explained that in recent weeks, in the context of a break-in at his home, he became “known to the Gardaí” and, in a more personal way came to understand the significance of someone who comes when you need help.

“This year also brought the stark reminder, with the death of Garda Golden in Co Louth, that the Gardaí never know what awaits them when they respond to a call. We pray for Garda Golden and his family,” he said.

He said a Christian’s faith should inspire them in particular to redouble their efforts to serve the common good.

“Our solidarity with one another, and especially with those in the greatest need is an expression of who we are as the people of a merciful God.”

In the special Jubilee Year of Mercy, Bishop Doran said that in a particular way Christians are called to be “merciful like the Father”.

Referring to the flooding crisis, Dr Doran said emergencies tend to bring out the best in us.

“Between the army and the volunteers in Athlone, the sand-bags have been filled and put in place and the pumps are working away. In much the same way, volunteers and statutory agencies have worked together to in places like Munich Central Station, to welcome refugees and to provide them with essential services.”

“Sometimes, however, we need to ask ourselves if it is enough simply to be responding to emergencies as they arise. Peace and the common good might be better served if the needs could be identified and responded to before it becomes an emergency.”

He also warned that it is easy for indifference to creep into institutions.

“Things tend to be put on the long finger. If we allow ourselves to become bogged down by routine or discouraged by the size of the task, there is a risk that we settle for being functionaries. Then the people whom we are called to serve can become little more than statistics.”

He added that the best defence against indifference in our institutions is people who really care about those whom they are called to serve; people who care enough to stick their necks out, as many of you do on a daily basis.

Looking to 2016, he noted that one of the first tasks the people of Ireland will have will be the election of a new Oireachtas and the formation of a new government, which will serve the common good.

“I know that people sometimes feel powerless in the face of the democratic process and I think that experience of powerlessness is shared by some of the politicians themselves. Be that as it may, but non-engagement would be an abdication of our responsibility,” the bishop warned.

He urged people to consider the quality of their participation.

“As Christians and as citizens, we need to engage with the candidates about the questions that really matter, not just to ourselves personally, but to our society as a whole.”

The issues he highlighted as challenges for Irish citizens and Christians as homelessness, refugees and stewardship of the environment.

The Bishop of Elphin said he believed that the faithful need to examine very carefully what the various political groupings are proposing to do about education, not just based on what they say in their manifestos, but on what they have said and done in the past few years.

“Our Catholic schools have a very good track record of inclusiveness, but there are those who would like them to be less Catholic. Does religious education have a place in our schools? If you believe it does, will that influence how you vote in the election? How will you support that choice in your own family? We are, after all, talking about your children and your grand-children,” he challenged.

On the 8th amendment, he commented that there had been a lot of political posturing about repealing it, which is “the only remaining protection unborn children have in our legal system”.

That protection has already been significantly eroded in recent years, Bishop Doran said and added, “I believe that committed Christians must make this an election issue and that candidates must be questioned politely but firmly, not just on their future intentions but on their past record. These are, after all, your children and your grand-children.”