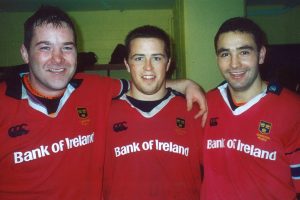 Bishop Brendan Leahy of Limerick has joined the outpouring of sympathy for the family of Irish rugby legend, Anthony Foley, following his untimely passing in Paris at the weekend.

On Monday, Dr Leahy expressed his deepest sympathy on behalf of the diocese to the wife, children, father, mother and sisters of the late rugby player and coach.

“It’s fair to say that the news of Anthony’s sudden passing simply took all our breaths away at the weekend. It’s one of those moments we will always remember where we were when we heard the news,” the Bishop said in a statement.

“Anthony Foley was simply that big of a figure in the lives of every sports fan from Limerick, Clare and, of course, the wider Munster and Ireland fan base.”

Bishop Leahy said that “The admiration in which he was held as a sportsman and person was very much reflected in the volumes of tributes that have come from right around the world.”

Bishop Leahy highlighted that the sports star was a past pupil of St Munchin’s College – a school under the patronage of the diocese of Limerick.

“The College is synonymous with rugby, of course, and Anthony Foley’s association with it is a huge source of pride. His passing is badly felt there today.”

Anthony Foley won a Junior Cup Medal in rugby there before captaining the College to a Senior Cup Final against Pres Cork in 1992, which St Munchin’s narrowly lost. Despite his team’s defeat in the match, Anthony Foley, by all accounts, “was heroic in it, something that became typical of the man throughout his career.”

The Bishop of Limerick said that “Whether on or off the field, Anthony displayed the same characteristics of honesty, integrity, loyalty, dignity and more. His loss will be immense but mostly, of course, to his wife Olive, sons Tony and Daniel, his father and mother and sisters.”

He concluded by stating that “Rugby is mourning the loss of a hero but nowhere was he as big a hero, I’m sure, than in the Foley family home.”

In January 2015, Munster rugby coach and former Irish international, Anthony Foley, joined Bishop Leahy and the then Minister for Education, Jan O’Sullivan, as well as 120 students and 200 past pupils at a formal re-opening of a refurbished and extended St Munchin’s College in Limerick.

The diocesan Catholic secondary school in Limerick is one of the oldest Catholic schools in Ireland, having been founded in 1796.

On Monday, the family of Anthony Foley issued a statement extending its deepest appreciation to the legions of friends and the wider rugby family in Ireland and abroad for the huge outpouring of support and sympathy since his tragic and most untimely passing.

“With Anthony’s passing, we have ultimately lost an amazing, adoring and loving father and husband; an equally caring, loyal and devoted son and brother; a central and go-to figure for the wider Foley and Hogan families.

“Our anguish at the sudden loss of Anthony is bottomless. We have been plunged deep into an incomprehensible darkness and sense of loss that we must work our way through over the coming days, weeks, months and years.

“We know, too, that his sudden death has brought the rugby worlds of Shannon RFC, Munster, Ireland and much further afield crashing down. You have lost a former player, coach, friend and all-round inspiration – your and our hero both. We mourn his loss together.

“We again wish to thank everyone for their support; it will help carry us through these darkest days,” they said.