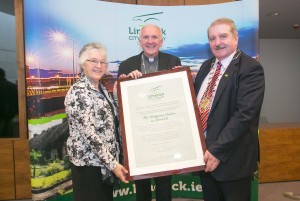 Bishop Brendan Leahy was among those who paid tribute to religious orders’ contribution to Limerick city at a civic reception given by Limerick City and County Council at the request of the Mayor of Limerick City, Kevin Sheahan.

It is one of the highest honours that the City and County Council can bestow and it was given in recognition of the orders’ significant role in education, healthcare and many other spiritual and social projects in Limerick.

Bishop Leahy described the civic reception as a moving tribute to the contribution these orders made to the lives of tens of thousands of people across the city and county.

He said the occasion reinvigorated those representing the orders and congregations as they heard many of the councillors speak with great fondness of the impact made on their own lives through education and healthcare provision.

“It was very moving to hear the councilors, one after another, speak from the heart of their own personal stories of indebtedness to orders and congregations,” he said.

“What struck me is how much the deeds that were done by the orders or congregations live on in the hearts and lives of those who benefited from them. There was a very real sense of appreciation; that the eaten bread is by no means forgotten, which was very heartening,” the bishop commented.

“It was a poignant echoing of the wide social reach the orders and congregations had and continue to have. While the limits and failures were acknowledged, it was fundamentally an evening to remember the positives and the councillors certainly did that. As some put it to me, it was an evening to say a long overdue thanks,” said Bishop Leahy.

He continued, “The sisters, brothers and priests of the religious orders and congregations who were there were buoyed by the experience. It was a very affirming and encouraging evening for them and one that will have renewed them for the continuation of their work. The fact that the civic reception was held during the Year of Consecrated Life proclaimed by Pope Francis made the occasion more gratifying.”

Some of the councillors, he said, recalled the contribution of the Company of Mary who ran St John’s Hospital and continue to be present in the Milford Care Centre, as well as the Good Shepherd Sisters.

Others gave moving accounts of being schooled in the Salesians, St Munchin’s, Mary Immaculate College and many more centres of education.

The highlight of the night was the presentation by the Mayor of a framed scroll with an inscription that encapsulated the contribution of the orders and congregations.

Josephite Sr Eileen Lenihan, who has been recently appointed by Bishop Leahy as the Vicar for Consecrated Life in the Diocese of Limerick, accepted the Scroll on behalf of the religious women and men of the orders and congregations.

Receiving the Scroll, she recalled Pope Francis’ words that the Year of Consecrated life is an occasion to look back with gratitude for the past, live the present with passion and look to the future with hope.