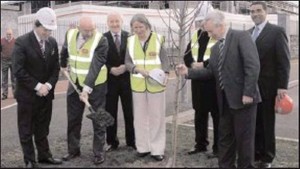 Catholic Schools in Ireland are a living expression of a long and varied tradition of education, Bishop Christopher Jones of Elphin said at the opening of a new school building for Summerhill College in Sligo.

The new building for the Catholic Voluntary Secondary School for boys, which is under the patronage of the Diocese of Elphin, replaces the existing school.

It received €12.5 million in capital funding from the Department of Education and the Minister for Education and Skills, Ruairí Quinn TD, attended the opening.

It will cater for 900 students and includes state-of-the-art facilities including four science labs, two woodwork rooms, two metalwork rooms, computer rooms and a multimedia room, a full-sized gym and fitness suite, and an art room.

An autism unit within the school has two classes, and there are plans to expand this provision in the future.

Speaking at the launch, the Minister noted the school’s long history and its role at the centre of life in Sligo since 1880.

“This school is an excellent example of how to respond to the needs of students of all abilities within a community” Minister Quinn said. “With this new, fit-for-purpose building, current and future students will be able to benefit even further from the dedication of the teaching and auxiliary staff here.”

“Not only that, but the whole community will be able to make use of various elements of the new facilities, as the College continues to be vital part of the Sligo.”

In his address, Bishop Jones, a past pupil of the college, said that as he looked back on his years as a student in Summerhill, he was especially grateful for the Catholic ethos that had enriched and enhanced his education.

However, he said there was a temptation today in contemporary Irish discourse to “dismiss religious belief as somewhat inherently irrational and divisive and even anti-intellectual.”

“The most important principle underpinning Catholic education is the value placed on this ongoing dialogue between faith and reason,” he said and added, “It is this principle which helps to explain the unique value of catholic schools and why they are so sought after throughout the world.”

Speaking about his own Catholic education, Bishop Jones said he carried in his heart a “deep and abiding faith” which had inspired “respect and admiration for the dignity and beauty of every single individual human person” because of it.

“Tragically a person can be scarred by poverty or violence or alcohol or other drugs but we must always see underneath the poverty and the addiction the dignity and beauty of each human person made in the image and likeness of God and destined for glory. All of us are called to treasure that dignity and help it surface through our care and kindness,” he said.

He challenged schools at primary and secondary level to find ways to bring home to students the inherent dignity of the human person.

“Perhaps a special week at the beginning of each school year would help engender in our young people a great sense of respect for their own dignity and the dignity of every human being,” he suggested.

Summerhill College was founded in Athlone in 1857 by the then Bishop of Elphin, Dr Gillooly, as the College of the Immaculate Conception, just ten years after the Famine Bishop Jones noted.

At first it was a diocesan seminary to prepare seminarians for the priesthood but very soon it opened its doors to all boys seeking secondary education.

The College was transferred to Sligo in 1880. It found temporary accommodation in Quay Street until the beautiful cut-stone college building was completed in 1892. Extensions were added in the 1950s and 60s to accommodate the increasing demand that came as a result of the introduction of free education.