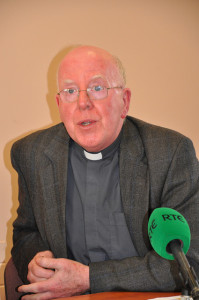 The Bishop of Dromore, John McAreavey, has resigned. His resignation came sixteen days after a BBC Spotlight documentary entitled Buried Secrets laid bare the actions of the paedophile priest Malachy Finegan, and asked what the Church knew and when.

Dr McAreavey’s resignation was made public by the BBC which had received a statement from the bishop’s solicitor stating, “Following media reports which have disturbed and upset many people in the Diocese and further afield, I have decided to resign with immediate effect. I shall make further comment in due course.”  The resignation was confirmed to CatholicIreland.

In a statement issued on 7th February before the broadcast of the Spotlight documentary (13th February), Bishop McAreavey said that the first allegation against Malachy Finnegan “came to light in 1994 some seven years after he left St. Colman’s College. The second allegation came in 1998 and was not related to his tenure at St. Colman’s. No further allegations emerged until after his death in January 2002”.

In other words, the abuse did not happen while he was Bishop of Dromore, however, in an in-depth article published in the Irish Catholic on 22nd February, Bishop McAreavey admitted that he had had four opportunities to unmask the paedophile priest Malachy Finnegan: in November/December 2002: when one of Finnegan’s victims, Paul Gilmore, expressed his anger at Dr McAreavey’s decision to say the Funeral Mass, in February 2006 after the publication of the book Up the Creek with a Paddle, in which American author Mary Anne Boyle Bradley revealed that her husband had been abused by Finnegan. “At that point I thought, gosh, this is an opportunity. I invited somebody round from social services and he specifically advised me not to do it,” Dr McAreavey told the Irish Catholic.  In June 2011, when he asked the National Board for Safeguarding Children to go beyond their terms of reference to include deceased priests, especially Finnegan.  He was turned down but he didn’t prompt them.  “I would certainly have named Malachy Finnegan for my peace of mind. Later I would ask myself, ‘why didn’t I just do it’?” Finally in November/December 2017, when the pictures of Finnegan were removed from St Colman’s pending their digital alteration, but the public was not told.

In the 7th February statement, Bishop McAreavey said that since becoming Bishop in 1999, “everything I have learned about the abuse of victims I have learned from victims. “It is their testimonies and their stories, which have impacted most on me.”  It was through their “perspective” that he realised how his own decision to say the Funeral Mass of Malachy Finnegan in 2002 was “the wrong one”.  “I realised that I had made an error of judgement. It is something I regret and will not repeat.”

Following the announcement of his resignation on 1st March 2018, one of Malachy Finnegan’s alleged victims, Sean Faloon, who spoke on the Spotlight documentary, expressed his relief to the BBC.  “As soon as I heard the news I could feel a lot of weight leaving my shoulders, my legs went light and then filled with energy, I was really, really relieved,” he said. Mr Faloon was one of three of Malachy Finnegan’s alleged victims who spoke on the BBC documentary. Mr Faloon said he was first abused by Fr Malachy Finnegan when he was a ten-year-old altar boy. The abuse lasted years.