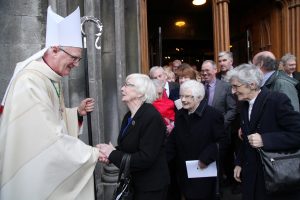 Bishop Dermot Farrell of Ossory paid tribute at the weekend to the charism of the Little Sisters of the Poor at a special Mass marking the 150th anniversary of their arrival in Waterford.

Referring to the congregation’s residence in Ferrybank in the Diocese of Ossory, Bishop Farrell said it would be “impossible to measure your impact on generations of families in the locality” and he paid tribute to their “very visible and active presence” today.

He recalled how the seeds of the Little Sisters of the Poor were laid by one extravagant gesture of loving kindness by one young woman who gave up her bed to an old, homeless, blind woman.

In his homily, Bishop Farrell said what inspired Jeanne Jugan were the values she picked up from her mother as a child, the example shown by her employers, and the spirituality of St John Eudes and the Brothers of St John of God.

“You are now a beautiful family of sisters distributed over five continents and 31 countries,” he said.

Noting how the airwaves are “clogged with talk on the homeless poor today”, Dr Farrell said it was “a huge reality” in Ireland.

“Would that you could have the resources to grow your ministry to encompass so many people who find themselves without a front door or a kitchen table to sit around.”

Referring to the forthcoming referendum on the Eighth Amendment on 25 May, the Bishop of Ossory said the primacy of human life, from its first instant until its natural end, appears to be something of which “we urgently need to acquire an awareness in the face of the culture of death which is becoming more and more evident in society”.

He highlighted how in some European countries, elderly people in the grip of fear and increasingly isolated are offered “The ultimate delusion, euphemistically expressed, a ‘happy death.’”

“This slippery slope, naively embraced by some convinced supporters, is too slippery to be defended as a right,” he warned.

He told the congregation that, “The slope of the aging population, along which Ireland is sliding, presents major challenges. Perhaps never before has there been such a need to care for the aging poor, as would Jesus Christ himself, and serve them with love and respect until death.”

Quoting Pope Francis, Bishop Farrell said, “A people that does not have care for the elderly, that does not treat them well, has no future: such a people loses its memory and its roots (28 September 2014, St Peter’s Square).”