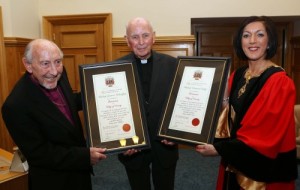 The retired bishop of Derry, Dr Edward Daly, has said 3,000 jobs would make “a world of a difference” to the city which is still grappling with high levels of unemployment.

Speaking to the Catholic Times, Bishop Daly described unemployment as still one of Derry’s “big problems” along with the legacy of the conflict.

“There are a lot of people still hurting, suffering over hurts that they have experienced – injustices that they experienced during the conflict. There is a lot of healing to be done,” he said.

The 81-year-old currently works as a chaplain in Foyle Hospice and was recently honoured with the Freedom of Derry along his friend and Church of Ireland counterpart, Bishop James Mahaffey.

The accolade bestowed by Derry City Council on Dr Daly, who retired as bishop in 1993, and Bishop Mahaffey, who retired in 2002, was described by Derry native and Primate of All Ireland, Archbishop Eamon Martin, as appropriate for two men who for many years “worked hard to build bridges in the City and, in doing so, together they both made a tangible difference to the lives of the people of Derry and beyond”.

In an interview in the current issue of the Catholic Times, Dr Daly recalled that both he and Bishop Mahaffey went guarantors for a loan for £3 million to establish Derry’s Inner City Trust to offer training and employment to young people in the city. A huge risk to take in a city marred by conflict in the 1980s.

However, by the time he retired from the Trust in 2000, it had a portfolio of property worth £25m. And all debts cleared.

These included the Tower Museum, the craft centre, the Nerve centre which provides music and a rehearsal space and there is also the school of animation.

“They saw money as something you got from the government or grants or welfare. To give them the dignity of work – once you can break that chain, people will go anywhere to get work; they won’t want to go back to the old situation.”

He currently works as a chaplain at Foyle Hospice which provides ongoing palliative care for patients with cancer and other life-limiting illnesses, and also provides support to their families and loved ones.

Since he started keeping records in 1998, he has accompanied over 800 people in their final journey.

Of the hospice movement he commented, “I think it is one of the great developments at the end of the 20th century. It is largely due to the goodness and care of women – it was the Irish Sisters of Charity who first conceived of hospice care when they founded a hospice in Dublin towards the end of the 19th century.”

“Then a lady called Cicely Saunders became a nurse in a hospice run by the Irish Sisters of Charity and she saw the value of the work that they were doing. She became a doctor subsequently and also an advocate – trying to persuade the medical profession and the political leaders to row in with the idea of a hospice.”

“Initially it was an anathema to the medical profession – the whole area of palliative care was considered something on the borderlines of medicine but now it has been embraced by the entire profession and most major hospitals have a palliative care department.”

He said the ethic of the hospice is first of all to care for the individual and to treat the symptoms rather than the disease.

Bishop Daly said that in the past very often people who had no chance of recovery were put on the back burner in hospitals, but that focus was entirely different in a hospice.

“The important thing for people approaching the end of their lives is to make sure that they are comfortable, to ease the pain and ensure it is a caring and loving environment and to also care for the family, which is equally important.”

“I think the doctors and nurses in the hospice are quite remarkable. I have worked with the hospice for more than 20 years and it has been a huge privilege to work among such fine people,” he told CatholicIreland.net

“The existence or lack of religion is utterly respected. The staff is from all parts of the community – it is just a wonderful expression of humanity and Christianity.”

“I do think it is one of the great developments of the latter part of the 20th century. Dame Cicely Saunders is another of my heroes – a very wonderful person.”