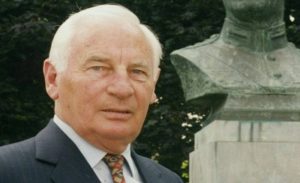 Bishop John Buckley described Mr Barry as a “man of great integrity and faith who, following in his family tradition, was deeply committed to public service”.

“This respect was a deserved tribute to Peter’s dedication to public service as a former Lord Mayor, Dáil deputy, as Minister for Foreign Affairs and for his invaluable work in the Peace Process including the Anglo Irish Agreement.”

The bishop of Cork and Ross noted that faith was “an integral part” of the former  Tánaiste’s life.

Practising his faith was important to Mr Barry, his late wife Margaret and his family.

“That faith motivated his spirit and success in public, private and commercial life.”

President Michael D. Higgins said he had learnt of the passing of Mr Barry with “great sadness”.

The President, who was a TD in the Dáil with Mr Barry, said he would he would be remembered by all who served with him, for his “great courtesy”.

“His view of Irish history was a long one and he brought all that wisdom to bear in his contributions to achieving the Anglo Irish Agreement of 1985,” the President added.

Peter Barry, son of Anthony Barry, a Fine Gael TD, was elected to the Dáil in 1969 where he served until 1997.

From 1982 to 1987 he was Minister for Foreign Affairs. It was in this capacity that he became  heavily involved in the Anglo Irish Agreement negotiations which resulted in the 1985 Anglo-Irish Agreement.

He was  the first joint chairman of the Anglo-Irish Inter-Governmental Conference established by the Irish and British governments. 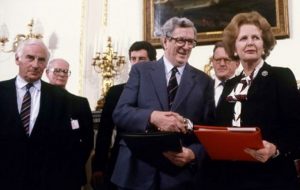 Paying tribute to Mr Barry, Taoiseach Enda Kenny said his central and pivotal role in negotiating the Anglo Irish Agreement “helped to create the foundations on which the peace process in Northern Ireland was built”.

Following the Labour Party’s withdrawal from the coalition government in 1987 Mr Barry became Tánaiste for a brief period.

A well known business man from Cork, he was a major shareholder in the family business, Barry’s Tea.

In 1997, he retired from the Dáil to be succeeded by his daughter Deirdre Clune.

In his statement following Mr Barry’s death, Bishop Buckley said that the prayer from the Order of Christian Funerals, “Blessed are those who die in the Lord, let them rest from their labours for their good deeds go with them” was most relevant to Peter Barry and he prayed that the Lord would “welcome Peter into eternal life”.