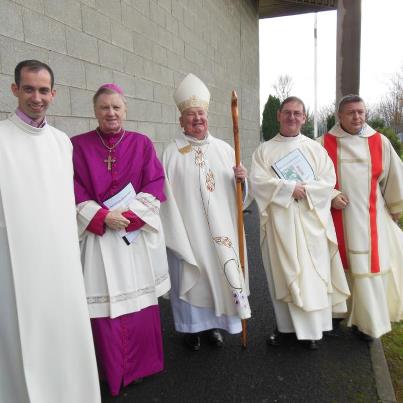 Bishop Eamon Walsh has criticised the weekend’s coverage of the first interview given by the former bishop of Ferns, Brendan Comiskey, as “terribly sad”.

Bishop Walsh, who acted as caretaker in Ferns from 2002 to 2006, following Bishop Comiskey’s resignation over revelations of his mishandling of allegations of sexual abuse by Colm O’Gorman against Fr Sean Fortune in the 2002 BBC documentary ‘Suing the Pope.’

Fr Fortune killed himself in 1999 while awaiting trial on 66 charges of sexual abuse against 29 boys.

Bishop Walsh was widely praised for his role as Administrator of Ferns and his facilitation of the investigations which resulted in the 2005 Ferns Report.

Speaking to CatholicIreland.net at the Irish Bishops’ Drugs Initiative national conference in Dublin on Saturday, Bishop Walsh described the coverage as “terribly sad” particularly in view of Brendan Comiskey’s age.

“Isn’t it terribly sad that we would chase an 80 year old man at this stage in his life – a man who has heroically overcome his difficulty with alcohol,” Bishop Walsh, who has been an auxiliary bishop in the diocese of Dublin since 1990, said.

He described the former Bishop of Ferns, whose alcoholism and flamboyant lifestyle, is believed to have left him incapable of confronting Sean Fortune and other abusive priests, as a man with “a big heart”.

Bishop Walsh explained that the priest that inspired him to become a priest was an alcoholic, “but he had a heart as big as the ocean. Bishop Comiskey had a big heart and still has.”

“We always have to look beyond the failings that we all have and look at the bigger picture,” he said.

Bishop Walsh, who tendered his resignation in 2009 following the publication of the Murphy Report into the mishandling of allegations of clerical sexual abuse in Dublin, but which the Vatican refused to accept, suggested that the coverage of Bishop Comiskey was about selling more newspapers.

“Once you have a well-known name and you bring their story to the public every so often, it sells papers. I couldn’t make my living out of that. It’s a sad reflection of the level we have stooped to to make money,” he criticised.

Speaking to CatholicIreland.net at the same conference, he referred to the disgraced Bishop’s admission that “he didn’t get things right” and his apology for that.

“I think that if more people had come forward earlier and admitted their mistakes the reconciliation process within the church would have been easier,” the Archbishop stated.

However, he also dismissed claims that Comiskey had been hiding since 2002. “He has been out of public life, not because he was hiding, but because he is a retired person and has lived a life of retirement.”

The Bishop Emeritus of Ferns also told journalist Paul Williams that an “extraordinary amount” of revelations concerning child abuse in the wider Irish society are yet to be exposed.

The Ferns report described Bishop Comiskey’s response to clerical abuse by as many as ten priests in his diocese as “inappropriate and inadequate” and found that the disgraced bishop  “failed to recognise the paramount need to protect children, as a matter of urgency, from potential abusers”.

In his interview with Paul Williams, Bishop Comiskey said Ferns now had an excellent structure in place to care for victims of abuse.

He also acknowledged that his alcoholism “was not an excuse” for his failure to protect children and he denied that he had been in hiding.

“I am not hiding; I am living like an ordinary Irish citizen. I am retired, retired people don’t talk to the public in any other profession,” he said.