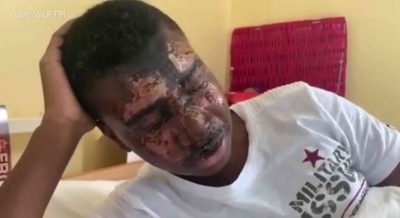 An acid attack on three youths in Waterford last week has been described as “horrific and shocking” by Bishop Alphonsus Cullinane.

Student Tega Agberhiere and two friends had the corrosive liquid thrown at them during an incident on the Earlscourt estate on 25th April, with the 16-year-old bearing the brunt of the attack.

Happily, doctors were able to save the sight in both his eyes. Tega is a promising football player, having played for the U15 and U16 Ireland soccer squads and having trials with English Premier League clubs Crystal Palace and Tottenham Hotspur.

In a message of support, the Bishop of Waterford and Lismore said: “Thank God he is improving and can now see in both eyes. We send him and his colleagues our prayers and best wishes.

Bishop Cullinane commented: “Our society must embrace Christy’s plea. It must be the wish of the whole community to live in peace and goodwill. Hopefully those who perpetrated this awful act will be brought to justice. May we all try to live in peace with our neighbour and do what we can to build up rather than tear down.

“On the day of the attack Tega had been studying for his Leaving Cert exam. We wish him and all those preparing for exams every good wish and success.”

Acid attacks like this are relatively rare in Ireland, but they are a growing phenomenon in the UK. According to the Garda, four teenagers were arrested in relation to the incident and have since been released without charge, but a file is being prepared for the Director of Public Prosecutions.