Bishop Denis Brennan has stated that everyone has a role to play in confronting the “secretive and pernicious” activities of human trafficking and modern slavery.

“Every family, village and town in Ireland has a role to play to stop this scourge,” he said.

The Bishop of Ferns has joined bishops and police chiefs from around the world at a conference about preventing trafficking and modern-day slavery.

Representing the Irish Catholic Bishops’ Conference at the annual meeting of the Santa Marta Group from 26 to 27 October, Bishop Denis Brennan said:

“At the first meeting of the Santa Marta Group in 2014 Pope Francis called for ‘the adoption of an effective strategy against human trafficking, so that in every part of the world, men and women may no longer be used as a means to an end, and that their inviolable dignity may always be respected.’”

Pope Francis also described human trafficking as “an open wound on the body of contemporary society, a scourge upon the body of Christ” and a crime against humanity.

Human trafficking is hugely lucrative and financially comparable to the illegal arms trade. The International Labour Organisation estimates that 2.4 million people are trafficked globally and that annual profits generated from trafficking in humans are as high as $32 billion (€29.1 billion).

In Ireland the Bishops’ councils for immigrants, and for justice and peace, as well as the aid agency Trócaire are involved in combating the crime and helping its victims.

Bishop Brennan said that Irish bishops are committed to raising awareness about this “challenging and dreadful crime” which targets the most vulnerable sector in society.

The Santa Marta Group conference will help to further develop the partnership between the Church and law enforcement agencies engaged in tackling these issues both in Ireland and at the international level.

Along with Bishop Brennan, senior officers from An Garda Síochána and from the Police Service of Northern Ireland are attending. 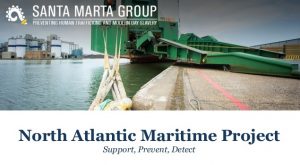 In May 2016, An Garda Síochána, in partnership with the Santa Marta Group, held a conference at Mary Immaculate College in Limerick on preventing human trafficking and exploitation within the North Atlantic Maritime Industry.

One speaker was Mia de Faoite – a respected civil servant with a good job who made some bad decisions and fell into drug addiction and prostitution. For the last 18 months of the six years she spent on the streets, Mia stood on streets in Dublin, including Burlington Road, alongside a trafficked woman called Jenny.

Jenny had been taken from her home and trafficked all across Europe before finding herself in Dublin. With no passport, language, friends, or knowledge of Dublin, she was completely at the mercy of the man who controlled every aspect of her life.

After many years of extreme violence, sexual abuse and exploitation, Jenny did escape. Both she and Mia have now started over.

The conference was attended by delegates from over 40 organisations working to prevent human trafficking and forced labour in the maritime and fishing industries. It heard about the North Atlantic Maritime Project, which is a partnership between representatives of the police, clergy, state and civil society from Ireland and Northern Ireland, the United Kingdom, Scotland, Spain and Portugal.