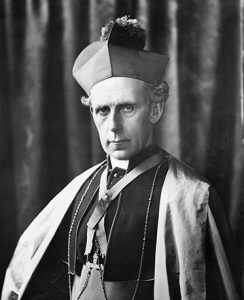 A book written about an Irish-born Australian Archbishop has scooped one of country’s top literary awards.

Born near Charleville in Co Cork, Archbishop Daniel Mannix was the son of a tenant farmer, Timothy Mannix, and his wife Ellen, née Cagney.

He was educated at Christian Brothers schools and at the seminary at St Patrick’s College, Maynooth, where he was ordained as a priest in 1890.

Mannix was president of Maynooth from 13 October 1903 to 10 August 1912 when he was succeeded by the Rt Reverend John F. Hogan.

On 1 July 1912, Mannix was consecrated titular Bishop of Pharsalia and Coadjutor to Archbishop Carr of Melbourne in Maynooth College Chapel.

In 1917, when Archbishop Carr died, Mannix became Archbishop of Melbourne serving in the post until his death in 1963 at the age of 99.

Over the last number of years one of Australia’s top biographers Brenda Niall has written the story of Archbishop Mannix’s life.

In researching her biography of Daniel Mannix, 85 year Brenda Niall who knew Archbishop Mannix personally, was surprised to find how liberal his views were on most issues.

He opposed World War I conscription, capital and corporal punishment, and the White Australia policy; supported the Church reforms of Vatican II; and called for more openness in teaching children about sex.

Speaking to the Sydney Herald she said, “I can’t say whether sexual abuse was going on his time but it probably was.”

“He lived to be 99 and his attitude to sex education was way before its time. If it had happened, children might have talked to their parents … He was against the silence.”

Niall’s biography of Mannix this week scooped its second major award in a month when it won the $25,000 National Biography Prize for its nuanced and personal portrait of a complex man who was Archbishop until his death in 1963 and is mostly remembered as a fierce anti-communist cold warrior of the 1950s and 1960s.

“He is a biographer’s nightmare,” Niall said, partly because he left instructions for all his letters to be burnt after his death. Only a few were saved by B.A. (Santamaria) for a biography he was writing.

Eight previous biographies have appeared and “none got near the private man”, says Niall.

She took on the challenge driven by curiosity about the Catholic tradition in which she was raised and because “at my age, 85, there are not many people alive who knew him”.

As a child, Niall lived in the same street as the Archbishop’s residence, Raheen, now the home of philanthropist Jeanne Pratt.

She often saw Mannix walking to St Patrick’s Cathedral, an exotic figure dressed in 19th-century style in a cloak and buckled shoes.

As a university graduate, Niall was employed to interview Irish-born Mannix when he was 95 and remembers Raheen as one of the coldest places she has ever been, the library heated by a three-bar radiator.

She sighted a box of the papers that were later destroyed but, as she found, many of the letters Mannix sent to Ireland had survived.

In her distinguished career as an academic, critic and award-winning author, Niall has published biographies of artists and writers including the Boyd family, Judy Cassab, and Mary and Elizabeth Durack, as well as a Jesuit priest, Fr William Hackett, and a botanist, Georgiana McCrae.

Niall received the National Biography Prize on Monday 8 August at the State Library of NSW, where senior judge Peter Cochrane praised her “biography of immense charm and elegance”, which manages “to recover both the public identity and the fiercely protected private self” and traces more than half a century of Irish and Australian history with “analytical skill and vision” and “silky smooth prose”.

“Here we meet a Mannix far more nuanced than the public memory, and far more amiable as well,” the judges’ report stated.

Mannix conjures a vivid sense of the man, of his “liberal views on nearly everything’, his shyness, his remoteness (‘a monk without a monastery’ said a lifelong friend); his equanimity, his sweeping scepticism, his sense of irony, his sharp wit, his haunting mixture of good humour and pathos.”

Mannix was chosen as winner from a record 110 entries for the 21-year-old prize.

The book was shortlisted along with Battarbee and Namatjira by Martin Edmond, Comrade Ambassador: Whitlam’s Beijing Envoy by Stephen FitzGerald, Thea Astley: Inventing Her Own Weather by Karen Lamb, Bearing Witness: The Remarkable Life of Charles Bean by Peter Rees, and Reckoning: A Memoir by Magda Szubanski.