Big Tom brought great joy to many in Ireland and worldwide 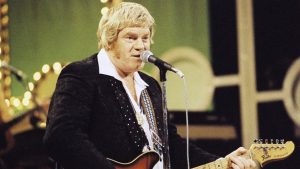 Fans and friends of country music star, Big Tom McBride, will be able to pay their respects between 12pm and 8pm today in Oram Community Centre in the Parish of Castleblayney, Co Monaghan, where his remains will lie in repose.

Hundreds of people lined the streets of Castleblaney to pay their respects to the singer as his remains were returned to his home in Oram on Tuesday evening.

Dubbed ‘The King’ of Ireland’s showband scene, the 81-year-old’s death was announced by his family in a statement on Tuesday which said, “It is with great sadness that we announce the passing of our dear father Big Tom McBride (RIP) this morning. Dad passed away peacefully in the company of his family. He will be sadly missed by all who knew him. May he rest in peace.”

The crooner’s career spanned five decades, during which time he filled dance halls throughout Ireland and the UK.

Responding to the news of the country music star’s death, Mgr Joseph McGuinness issued a statement on behalf of the diocese of Clogher.

“Like many people around the country, we have all learned with great sadness of the death of Big Tom. The word ‘legend’ is often overused on occasions like this, but in Tom’s case it is truly fitting and well deserved,” Mgr McGuinness said.

“During his life, Tom brought great joy to many people, both in Ireland and worldwide, through his singing and his music. His contribution to Irish social and cultural life in this area has been enormous.”

Mgr McGuinness continued, “But Tom McBride was more than just a singer. Above all, he was a family man. Tom, and his late wife Rose, formed a strong team in their household and in the wider community.”

“Tom was a pivotal member of the community in his native Oram, where he contributed greatly through farming and sport. He was very proud of that community and of Co Monaghan in general.”

“On behalf of the priests and people of the Diocese of Clogher, I pray that God will grant Big Tom eternal rest and I extend to his family our prayers and sincere sympathy at this time.”

One of Big Tom’s lifelong friends, Fr Brian D’Arcy, said the singer never got over the death of his wife Rose in January.

He had been gigging up until last year but ceased when Rose became ill.

The removal and funeral Mass for Big Tom will take place on Friday morning at 11am in St Patrick’s Church, Oram. Burial will take place after Mass in the adjoining cemetery.