Home > News > Increase in the number of ordinations in US

Increase in the number of ordinations in US 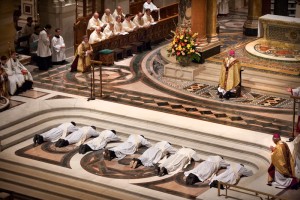 Bishop Michael F. Burbidge of Raleigh, chair of the US bishops’ Committee on Clergy, Consecrated Life and Vocations, found that the data gave reason for hope but also provide areas for further growth.

“It is encouraging to see the slight increase in the number of ordinations this year in the United States,” Bishop Burbidge said.

“When asked about the positive influences they encountered while discerning the call, those to be ordained responded that the support from their family, parish priest, and Catholic schools ranked very high.”

“Over 26% of those ordained carried educational debt at the time they entered the seminary, averaging a little over $22,500 in educational debt at entrance to the seminary. Considering the high percentage of the men ordained already having earned an undergraduate degree, it will be important to find ways to assist in debt reduction in the future.”

According to data released by the US Conference of Catholic Bishops, those due to be ordained this year report that they were, on average, about 17 when they first considered a vocation to the priesthood and encouraged to consider a vocation by an average of four people.

The Georgetown University-based Center for Applied Research in the Apostolate (CARA) gathered the date for “The Class of 2015: Survey of Ordinands to the Priesthood.”

CARA collects the data annually for the US bishops’ Secretariat for Clergy, Consecrated Life and Vocations.

The full report can be found online: www.usccb.org/beliefs-and-teachings/vocations/ordination-class/index.cfm

Among the survey’s major findings: