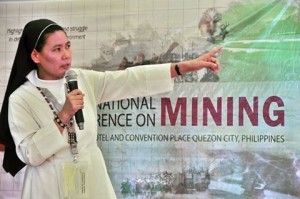 A Benedictine nun in the Philippines has been named as this year’s winner of the City of Weimar human rights award for her anti-mining advocacy in Mindanao.

Sr Stella Matutina has been recognised for her dedication to the rights of the native population, despite threats to her safety.

“This highlights the situation of Mindanao and the Philippines in general where the poor, the farmers, the indigenous peoples, the human rights activists and defenders of the environment endure harassment and face risks and death,” the 47-year-old nun told UCANews.

She said the award acknowledges the “collective sacrifices” of freedom and environment defenders in the face of a “systematic effort to limit democratic space and security threats”.

The nun, who comes from a poor family in Mindanao, said her heart “will always be for the poor and the victims of abuses”.

“My life will always be dedicated to them,” she said.

Sr Matutina has been a vocal opponent of attempts to convert the farmlands in Mindanao to plantation crops like palm oil, pineapples, and bananas.

She has also led a campaign against the entry of large-scale mining companies in tribal communities in Mindanao.

In 2012, the Philippine military labeled Sr Matutina a “fake nun” and accused her of being a communist New People’s Army guerrilla.

In 2009, soldiers detained the Benedictine nun and two other anti-mining activists in the town of Cateel in Mindanao for giving a lecture on environmental awareness to residents of an upland village.

Early this year, authorities charged her, other Church leaders and human rights activists with kidnapping, human trafficking, and illegal detention for taking care of displaced tribal people in the provinces of Davao del Norte and Bukidnon.

“These are proof that helping the oppressed, the poor, the abused comes with great risks,” said Sr Matutina, chairwoman of the Sisters Association of Mindanao and secretary-general of the environment protection group Panalipdan.

Since 1995, the Weimar Award has honoured individuals or groups engaged in the fight for freedom and equality, the prevention and condemnation of genocide, the right to free speech, and the respect and preservation of political, ethnic, cultural and religious rights of minorities, among others.

The Weimar Award, which is supported by aid organisation Missio, will officially honour Sr Matutina in December.

The award includes €2,500, which the nun said will help support her organisation’s advocacy.

Separately, a group of 22 people including priests and lay people, have just completed a pilgrimage to the heart of the Amazon to highlight the plight of creation and to remember Sr Dorothy Stang, the missionary murdered over her advocacy of indigenous rights and campaigning against environmental degradation by logging companies in the Amazon.

“Sister Dorothy is present through the struggle of the people. These are people of faith who seek to organise and live the same continuous struggle. And for us who come from the archdiocese of Mariana, that is a great inspiration,” said Fr Anthony Claret of the Archdiocese of Mariana, in the heart of the Amazon.

The mission lasted 15 days in the Prelature of Xingu, in the area of Pará. As part of the mission the 10th Pilgrimage in memory of Sister Dorothy Stang was held, which had as its theme ‘The seed planted germinates: we are Sister Dorothy’.

The three words that guided the 55km pilgrimage were: memory, commitment and hope.

The pilgrimage took place during the last week of July and ended in the place where Sr Dorothy Stang was murdered.

The pilgrimage is organized to raise awareness on the need to preserve the Amazon rainforest, the lung of humanity.