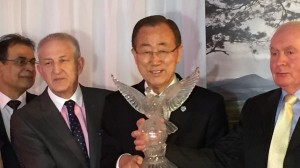 One of the world’s most important ‘bridge builders’ was presented with the Tipperary International Peace Award at the weekend.

Ban Ki Moon, who is the 8th Secretary General of the United Nations, was presented with the award at a special ceremony at Ballykisteen Hotel in Tipperary Town.

In his citation, Martin Quinn of the Tipperary Peace Convention, said Mr Ban had, through his role as the UN Secretary General, “given a voice to the world’s poorest and delivered tangible meaningful results for human rights”.

He added, “You are being honoured for your leadership in addressing national disasters and conflicts. In all the economic upheaval you have given voice to the world’s most vulnerable.”

Mr Quinn quoted the founder of Muintir Na Tire, Canon John Hayes, as he summed up saying, “It’s better to light a candle than to curse the darkness. Mr Ban, you have certainly lit a light for the world’s most vulnerable.”

The Minister for Foreign Affairs, Charlie Flanagan, praised Mr Ban and said that he had been “a champion for the world’s most vulnerable”.

He added that it was “fitting that the Peace Convention’s first ever recipient was another man with strong UN connections – Sean McBride”.

A song entitled, ‘Peace Begins with a Smile’ was sung by Drew Allen while a letter from former Ulster Unionist MLA, Fraser Agnew, praising the Tipperary Peace Convention was read out.

In his address, Mr Ban said he was accepting the award on behalf of all the hard working staff at the United Nations.

“Ireland has always been one of the strongest supporters of the United Nations and some 90 Irish soldiers have lost their lives in the quest for worldwide peace,” he commented.

“Ireland’s involvement in the Good Friday Agreement and its experience of Famine has made it a world leader for human rights,” the UN chief stated.

Mr Ban said that he had heard the song ‘It’s a Long Way to Tipperary’ and now knew it was not a mythical place but somewhere to associate with peace.

The Korean is the 31st winner of the award which has honoured people such as Nelson Mandela, Senator Ted Kennedy and former president Mary McAleese.

Among the dignitaries who attended the event included the Minister for Foreign Affairs and Trade, Charlie Flanagan, the Minister for the Environment, Alan Kelly, and the Minister of State Tom Hayes as well as the Archbishop of Cashel & Emily, Dr Kieran O’Reilly.

President Higgins congratulated the UN chief on his work to date, mentioning in particular his appeal to the international community to respond to the global economic crisis in 2008.

The President went on to cite Mr Ban’s significant achievements in the area of disarmament, arms control and non-proliferation of nuclear weapons, and gender equality.

The UN Secretary-General thanked the Irish people for Ireland’s unbroken record at the United Nations, in peacekeeping, with Irish soldiers having served over 64,000 tours of duty on various missions since 1958.

The critical importance of 2015 for the UN and for the planet was emphasised with a special importance attached to July’s UN Financing for Development conference in Addis Ababa, September’s UN Summit for the Adoption of the Post-2015 Development Agenda in New York, and the Paris Summit on Climate Change in December.

President Higgins stressed that Ireland had been honoured to be asked, along with Kenya, to facilitate the discussion on the post-2015 sustainable development goals. He underlined how pleased Ireland is that Mary Robinson has been appointed as the UN Secretary General’s Representative on Climate Change.

The President also raised UN reform, the institutional crisis at international level, the need to strengthen the role of diplomacy and the need for such institutional reform, as would confer on the United Nations a greater capacity to act on major global issues and events.