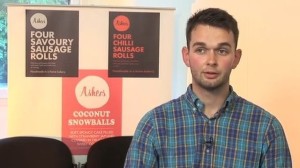 A Christian bakery in Northern Ireland which is at the centre of a row over its refusal to make a cake with a slogan supporting gay marriage may be facing a discrimination case in court.

However, Daniel McArthur, who is general manager of Ashers Baking Company, which employs 62 people across its six shops in Northern Ireland, has said the company stands by its decision.

He also wanted the cake to feature the logo of the campaign group called ‘Queerspace’.

The cake was ordered for a civic event in Bangor Castle Town Hall to mark International Day Against Homophobia and Transphobia.

According to a video interview with Daniel McArthur, staff and management at the bakery discussed the order and decided it would go against the company’s Christian ethos.

“We felt it was at odds with our beliefs and in contradiction with what the Bible teaches,” he said.

They informed the customer that they couldn’t take his order and refunded him.

Six weeks later the Equality Commission for Northern Ireland wrote to Ashers warning the company that it had breached the 2006 Equality Act regulations on service provision on grounds of the customer’s sexual orientation.

The Equality Commission told them they had seven days to remedy the situation or else face court action.

“I was very surprised to receive the letter because we hadn’t spoken to them and they hadn’t tried to contact us regarding the matter,” Daniel McArthur said.

Ashers was founded in 1992 by Christians and its current directors are Christians.

“That means we run the company by Christian values and beliefs according to what the Bible teaches. And it also means that we don’t open on Sundays, that we trade honestly and openly with people,” Daniel McArthur explained.

He explained that the company is called Ashers because in the Bible Ashers is one of the twelve tribes of Israel who were bakers.

The general manager added that it was not the first time his company had refused customers’ cake orders.

“In the past, we’ve declined several orders which have contained pornographic images and offensive, foul language.”

He highlighted that marriage in Northern Ireland was still defined as being the union between one man and one woman.

“This was another factor to consider in our decision-making process,” he said.

Daniel McArthur said he would like any Christians running a business be allowed to follow their Christian beliefs and principles in the day-to-day running of their business and that they be “allowed to make decisions based on that.”