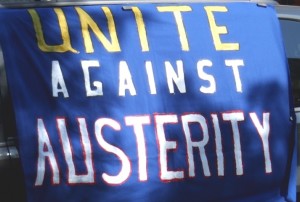 European austerity policies have failed to address the social impact which economic suffering has caused according to a new report from Social Justice Ireland for Caritas Europa.

The Irish think tank calls for just policy responses that benefit all in its latest report launched Monday entitled, ‘Poverty and Inequalities on the Rise – Just social models needed as the solution!’

The report finds that austerity policies in the EU have contributed to intense economic suffering, particularly for young people and other vulnerable social groups.

Some 123 million EU citizens – one in every four – are at risk of poverty and social exclusion – an increase of 7 million in the six years up to 2013.

An extra 8.4 million people became unemployed in the same period and almost one quarter of economically active young people in the EU are unemployed.

Young people constitute the largest group in the EU that is underemployed and feels discouraged in looking for work.

‘Poverty and Inequalities on the Rise – Just social models needed as the solution!’ is the third in a series of annual reports written by Social Justice Ireland for Caritas Europa, a European-wide advocacy organisation.

The report found that 7.3 million young Europeans (aged 15-24 years) were classified as NEETs, that is ‘Not in Employment, Education or Training’ in 2013.

The report confirms the harsh impact of unemployment, underemployment and low wages on the vulnerable, including children.

Society, not just individuals and their families, pays a high long-term cost for youth unemployment, the report also reveals.

“A 2012 study by the European Foundation for the Improvement of Living and Working Conditions estimated that the disengagement of young people from the labour market resulted in an economic loss of €158bn, or 1.2% of European GDP,” warned Michelle Murphy, Research & Policy Analyst at Social Justice Ireland.

“This level of young people not in education, employment or training across Europe is extremely worrying, especially when you consider the long-term ‘scarring effects’ of early unemployment. The negative impact on lifetime earnings is most pronounced for young people who experience periods of unemployment”.

She said the Caritas Europa report offers clear recommendations for policymakers and stakeholders which, if followed, would ensure that the social impact of policies were considered and addressed from the outset. These include:

“Government must act on the evidence provided by this report, and adopt policies to meet Ireland’s own national targets for education, poverty and social inclusion under the Europe 2020 Strategy,” said Dr Seán Healy, director of Social Justice Ireland and one of the report’s authors.

“This report confirms that a key role of social policy is to help individuals and families cope with the consequences of economic shocks, and to prevent temporary problems from turning into long-term disadvantage.”

“Social welfare supports in Ireland provide a minimum floor to protect families against poverty. But these supports do not allow people to live in dignity, let alone flourish and participate actively in our economy,” Dr Healy said.

One in six children in Ireland, over one in four children in Greece and almost one in three children in Romania are ‘at risk of poverty’. This is totally unacceptable in modern democratic societies,” he added.

“The European Commission aims to lift 20 million people out of poverty and social exclusion by 2020. European practices are failing to match European rhetoric.”

Michelle Murphy said; “With Europe at a crossroads on the Greek debt issue and countries still struggling with anti-austerity programmes, the report reminds us that governments have an essential duty to make choices that benefit both the most vulnerable, and society as a whole.”