Aussie bishops refuse to break the seal on Confessional confidentiality 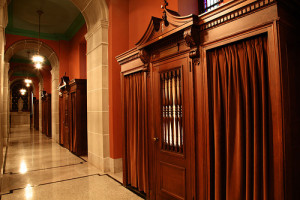 A storm is brewing in Australia over the refusal by bishops to agree to reporting evidence of child abuse heard during the Sacrament of Reconciliation.

But the controversy over the secrecy surrounding the Sacrament of Reconciliation may draw attention away from dozens of recommendations made to the Church in Australia about the way it runs its affairs, particularly in relation to child protection.

On Friday, the Australian Catholic Bishops Conference (ACBC) and Catholic Religious Australia (CRA) issued a joint response to the 17-volume final report of the Royal Commission into Institutional Responses to Child Sex Abuse. The commission spent five years investigating how church and civil institutions dealt with allegations of abuse and evidence of abuse.

In their statement, ACBC and CRA said: “Bishops and religious leaders have accepted or accepted in principle or supported 98 per cent of the Royal Commission’s recommendations. The one recommendation we cannot accept is Recommendation 7.4, which refers to the seal of the Sacrament of Penance. This is because it is contrary to our faith and inimical to religious liberty. We are committed to the safeguarding of children and vulnerable people while maintaining the seal. We do not see safeguarding and the seal as mutually exclusive.”

In many countries, including common law countries such as Ireland, the UK and Australia, there exists lawyer–client privilege where a person, as a right, is not obliged to disclose to anyone confidential communications between them and their legal representative.

Traditionally, most Catholics would believe that the same legal privilege should apply to the Sacrament of Reconciliation, but there are few jurisdictions, if any, that explicitly provide the protection of privilege to communications within the confession box. As part of their formation, Catholic priests are instructed never to disclose what had been told to them by a repentant sinner.

The row about the Seal of the Confessional is likely to over-shadow other possibly contentious areas between the Australian legislature and the Catholic Church, particularly in relation to governance.  The Australian Catholic Bishops Conference commented: “A few recommendations have been marked ‘For further consideration’, and those which mention the Holy See have been marked as ‘Noted; ACBC has informed the Holy See’.”

The Royal Commission found there were “catastrophic failures of leadership of Catholic Church authorities over many decades”. In total, the Royal Commission made 409 recommendations. Among those forwarded by the Australian bishops to the Vatican for further consideration are: