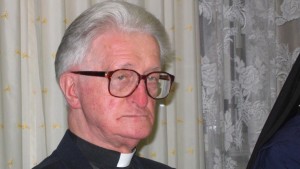 The 70th anniversary of the liberation of Auschwitz concentration camp was marked on Tuesday by survivors and political representatives in Europe.

This little-known and humble Jesuit priest helped make two of the greatest saints of our era: Pope Saint John Paul II and St Faustina of the Divine Mercy.

On 10 November 1939, shortly before his 25th birthday, and while still a Jesuit seminarian, Antoni Mruk was arrested in Krakow by the Gestapo together with a group of fellow Jesuits, and sent to Auschwitz concentration camp, before being transferred to Dachau for the rest of the war.

Although Jews were the main victims of Nazi barbarism, the people of Poland were not spared.

A week before the Germans invaded Poland on 1 September 1939, Hitler gave instructions to “kill without pity or mercy all men, women and children of Polish descent and language”.

Because of this merciless policy, one in every five Poles was killed during World War II, or just over 6 million Poles altogether.

Thousands of priests were deported to concentration camps.

Because Antoni Mruk had tailoring skills, he was assigned to repair the uniforms of German soldiers, and this probably saved his life, meaning he was not forced to work outside in light summer clothing during the bitterly cold winters.

Less than 40 miles from Auschwitz concentration camp is the house in Krakow where Sr Faustina Kowalska, the Apostle of the Divine Mercy, died on 5 October 1938 at the age of 33, less than a year before Germany invaded Poland.

It is no coincidence that this holy shrine reminding us of God’s unlimited mercy is so close to an unholy place that reminds us of man’s inhuman brutality.

Mercy is how God’s love expresses itself when it meets suffering.

When we try to build a world without God, it quickly becomes a merciless world. And Jesus, whose mercy is without limits, is the only One who can atone for our sins against God and against each other.

She was canonised as a saint on 30 April 2000, a day that Pope John Paul II revealed was the happiest of his entire life.

They had first met in 1946. I remember Fr Mruk making his way regularly to the Vatican, dressed in his simple black cassock, to absolve the Pope in the name of the God of infinite mercy.

For many years Fr Mruk taught moral theology at the Pontifical Gregorian University in his characteristically merciful way.

He and I were practically the only two in a large community of over seventy Jesuits who liked to drink tea after lunch, so we regularly had a little chat as we stood side by side, sipping our cups of tea.

Fr Mruk wasn’t a man of many words, but even his silence radiated peace.

He truly incarnated mercy and kindness. He never said a bad word about anyone, not even about those who imprisoned him for the whole length of the war in two of the most notorious concentration camps ever built: Auschwitz and Dachau.

The source of his strength was his love of God and of Our Lady.

I can still picture Fr Mruk, in the little spare time he had, walking back and forth on the flat roof of the Gregorian University, his hand clutching his rosary beads, his spirit immersed in prayer.

As postulator of the cause of Sr Faustina Kowalska and confessor of Pope John Paul II, Fr Mruk had a hand in shaping two of the greatest saints of our time.

Pope John Paul II’s death – appropriately on Divine Mercy Sunday 2005 – shook Fr Mruk deeply, and he steadily declined from then on, eventually dying peacefully in December 2009 at the age of 95.

In each of our hearts there is an ongoing struggle between good and evil, between mercy and brutality.

Fr Mruk, a model of Jesuit discernment and a model priest, only ever let himself be led by the voice of mercy.

Fr Mruk, pray for us, that we too may always trust God’s infinite mercy.