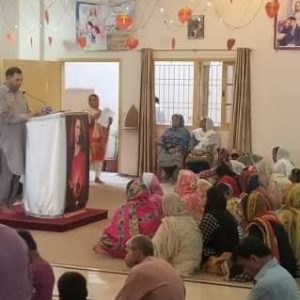 Worldpriest founder Marion Mulhall says she is astonished at how the Christian community in Pakistan is responding to her organisation’s annual global rosary relay for the sanctification of priests.

It is reckoned by one Pakistani parish priest that half a million people took part in the rosary relay in the Islamic Republic, where only about 1.1 million people, less than 1 per cent of the total population, is Catholic.

The global rosary relay takes place each year on 28 June, with the intention of giving thanks to God for our priests and to implore the protection and loving care of Our Lady, Mother of all priests, for all her priestly sons.

Prayer groups met at 265 locations in more than 70 different countries across the world participate. Groups usually meet at churches or shrines and some in private homes, but wherever they are located each group prays one of the mysteries of the rosary for a half-hour period, according to a dedicated schedule.

For the second year in a row, Mulhall has been delighted with the response to her initiative in the Islamic Republic of Pakistan, where Christians often fear being attacked for openly practising their faith.

“In total over half a million Catholics took part around the country, representing a huge proportion of the total Catholic population of the Islamic Republic of Pakistan.”

It is an astounding number, indicating that nearly half of Pakistan’s 1.1 million Catholics participated in the initiative, which included an eve-of-relay prayer service at the Church of St John Marie Vianney in Karachi.

The Irish bishops’ advisor to WorldPriest is Archbishop Michael Neary of Tuam, who says: “I am happy to support and highly recommend the current initiative of the Worldwide Rosary Relay. I believe it has great potential and will bring many spiritual benefits to all involved.”