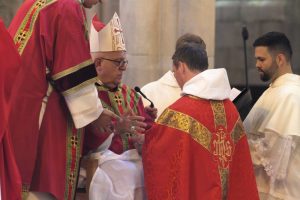 Former footballer and now Dominican priest Fr Philip Mulryne was ordained on Saturday in Dublin by Archbishop Joseph Augustine Di Noia of the Vatican’s Congregation for the Doctrine of the Faith (CDF).

In his homily, Archbishop Di Noia, who is himself a Dominican, paid tribute to Fr Mulryne’s past athletic feats as a preparation for this path to priesthood.

“Your experience as an athlete has helped to prepare you for this moment: you have known the meaning of working hard to attain a goal, and now the goal is Christ.”

The Archbishop, who is Assistant Secretary of the CDF, travelled specially from the Vatican to preside at Saturday’s ceremony.

Thirty-nine-year-old Fr Mulryne grew up in Belfast, one of a family of four.

It was while he was playing for his parish soccer team – St Oliver Plunkett – that he was spotted by a scout for Manchester United and invited as a 14-year-old to go for a trial. He impressed the selectors and was offered a two-year schoolboy contract.

In 1994, after finishing secondary school, he became a full-time professional and was offered a four-year contract with Manchester United.

He made his debut against Ipswich Town in 1997. In all, Fr Philip played five times for Man Utd’s first team before he was sold to Norwich City in 1999, where he played 135 times over six years. 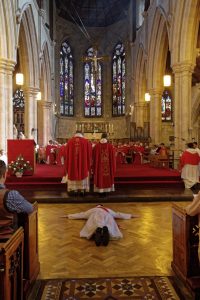 He made his debut for Northern Ireland in 1997 against Belgium and went on to play 27 times, scoring three goals.

After short spells at Cardiff City and Leyton Orient, the future priest retired officially from football in 2009 and entered the diocesan seminary of St Malachy’s Belfast, spending two years studying philosophy at Queen’s University Belfast and at the Maryvale Institute.

Fr Philip completed his studies in philosophy and went to the Pontifical Irish College in Rome to study theology for a year at the Gregorian University before discerning a call to religious life.

He entered the Dominican novitiate in Cork in 2012.

On the feast day of St Kilian, bishop and martyr, Archbishop Di Noia told the young Dominican priest that the “Holy Priesthood is an extension of the mystery of the Incarnation itself. The only begotten Son of God, who came to us in human flesh as our Saviour, did not leave us as orphans after His passion, death and resurrection.

“You are to be raised to the Order of the Priesthood. For your part you will exercise the sacred duty of teaching in the name of Christ the Teacher, and in imitation of our blessed founder, St Dominic. 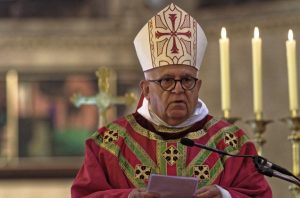 Archbishop Joseph Augustine Di Noia of the Vatican’s Congregation for the Doctrine of Faith. www.dominicans.ie

Archbishop Di Noia also reminded Fr Mulryne that priesthood is at the heart of his Dominican vocation.

Quoting from the Order of Preachers’ constitutions, “Made cooperators of the episcopal order by priestly ordination, we have as our special function the prophetic office by which the Gospel of Jesus Christ is proclaimed everywhere both by word and example, with due consideration for the conditions of persons, times, and places so that faith is awakened or penetrates more deeply all life in the building up of the body of Christ, which is perfected by the sacraments of faith” (LCO 1.v).

Dominican founder St Dominic was a priest himself who had exercised his priestly ministry as a canon of the Cathedral of Osma where he also lived in community under a religious rule.

Later in the summer Father Philip Mulryne OP will be assigned to the Dominican priory at Newbridge, Co Kildare, where he will join the chaplaincy team at Newbridge College.