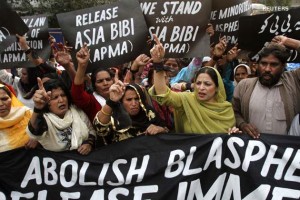 A Catholic wife and mother who spent nine years on death row for blasphemy before being acquitted has escaped Pakistan. Pakistani government officials confirmed that Asia Bibi left the country, but they did not say where she went. Catholic News Agency reported that she had arrived in Canada, where she has been offered asylum.

Irish charity Church in Chains also reported that Asia Bibi had arrived in Canada with her husband, Ashiq Masih, and was reunited with her daughters, aged 20 and 18.

The timing of her move was a big surprise, David Turner, Director, Church in Chains, told CatholicIreland.net. He had informed a well-wisher at church only the previous evening that there was no news of Asia Bibi.

“I had expected it would be announced once she was out of the country,” he told CatholicIreland.net. “In view of the protests that greeted her acquittal in the Supreme Court – there were riots in the streets – it was wise that it was kept quiet, but it took everyone by surprise.”

Early on Wednesday (8 May 2019), details of her sudden departure from Pakistan began to emerge, but there was no further news as the day went on. David Turner said this was not unusual, as no details or photos have been released since her family went to Canada. “I think that is part of the picture to keep them safe in Canada,” he said.

“A colleague of mine who was in touch regularly with her husband over the past two to three months has indicated that there are health concerns but they are not specified by him. It would be correct to say that there are concerns for her health,” David Turner told CatholicIreland.net.

“She has been held in protective custody by the Pakistani government over the past months. She has been kept safe, but she has been kept with her husband in just a small room so I am not sure that she has received as much medical help as she needed.”

He said that this last period has been particularly hard on one of Asia’s daughters who has special needs and who could not understand how her mother was released from prison but could not leave Pakistan.

“I think it was a trial and a challenge for her,” he said. “She would have been able to be in telephone contact with her mother, but now she will be able to live with her, and hold her and greet her and be with her all the time.”

Over the years that Church in Chains has campaigned for Asia’s freedom, its members have been encouraged by the support of many Irish Christians – expressed in prayer and action – most recently at the vigil at the Pakistani Embassy in Dublin in November 2018. (See CatholicIreland.net news report 14 November 2018.)

David Turner thanked TDs, senators, Irish government officials and journalists who have spoken up for Asia. He said that “as Asia begins a life in freedom, we will continue to pray and work on behalf of those innocent Christians who are still imprisoned under Pakistan’s blasphemy laws including Zafar Bhatti, Shagufta Kausar and Shafqat Emmanuel, Imran Ghafur Masih and Sawan Masih.”

In a short statement, Aid to the Church in Need (ACN) UK also welcomed the news. Neville Kyrke-Smith, National Director, ACN (UK) said: “Thank you to so many people who have prayed and campaigned for Asia Bibi’s release. Today is a day of rejoicing. At Aid to the Church in Need we were privileged to welcome some of Asia Bibi’s family to the UK last year; we are sure that the presentations they made gave added impetus to finding a solution for Asia who had suffered unjust imprisonment for nearly ten years.”

Asia Bibi’s lawyer, Saif ul Malook, said her release and arrival in Canada were the result of hard work by activists, foreign diplomats and others who stood by her in hard times and worked for her freedom.

Asia Bibi was convicted of blasphemy and sentenced to death by hanging in 2010. The case was based on accusations from work colleagues that she had made insulting remarks about the Islamic prophet Muhammad after an argument over a cup of water on the farm where she worked. She appealed the conviction to no avail, but the Supreme Court agreed to hear her appeal in 2015, and acquitted Asia Bibi in October 2018.

During her time in prison, she attracted international support, including that of political and church leaders, and Pope Benedict XVI and Pope Francis had met with her daughter and offered prayers.