Art is the focus of one of the latest series of workshops at Ireland’s national shrine.

The ‘Art as a Doorway to the Divine’ workshop will be facilitated by the artist who created the stunning mosaic at Knock Shrine, PJ Lynch, and a colleague Imogen Stuart who also made many works of art at the shrine and a monument to Pope John Paul II in Maynooth, Co Kildare.

PJ Lynch’s mosaic depicting the apparitions at Knock is composed of more than 1.5 million individual pieces and was unveiled at Our Lady’s Basilica on Sunday on 28 February 2016. Speaking at the ceremony, Archbishop Michael Neary described the artwork and said, “It is difficult to find a language which would capture the beauty and magnificence of what we behold and yet isn’t it just a shadow of the reality which those 15 people looked upon on that August evening at the gable end a few yards away.”

On Saturday 4th November, 2017 participants can take time to appreciate this and the many unique pieces of art in the grounds and churches at Knock Shrine. These include the intricate sculptures of Irish Saints in the grounds, or the decorative Harry Clarke windows in the Parish Church.

As well as discussing some the more prominent artworks at the Shrine, artists Imogen Stuart and PJ Lynch will discuss the religious art pieces they created for Knock. 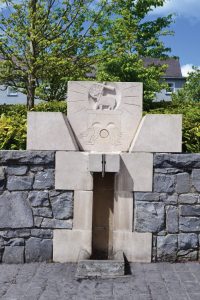 The eighteen holy water fonts in the area in front of the Apparition Chapel, were carved by Imogen Stuart in 1991. She is best known for her ecclesiastic commissions and has many notable sculptures in various religious sites in Ireland, including the Stations of the Cross in Ballintubber Abbey.

The holy water fonts at Knock are characteristic of her style; stone reliefs carved using white Portuguese limestone and grouped in six sections of three. The internationally known artist and sculptor took the subjects from the Old and New Testament, from the symbolising of water in early Christian art and from the words of Saints concerning water. Also shown are scenes from the lives of saints and their encounter with water. The main purpose of the holy water fonts was to give meaning and dignity to the use of holy water at Knock. Imogen Stuart also carved the bronze Statue of St Joseph in the Basilica.

This is just one of a number of events this autumn / winter at Knock Shrine. A Music Workshop for Choirs will be facilitated by Liam Lawton on Friday 27th October at 7.30pm. This is for choirs or those involved in music ministry to learn more about Liam’s new Mass setting, ‘The Mass of St Patrick’.

The ‘Quiet Day for Busy People’ day retreats are a quiet space to experience peace, reflection and prayer. The first retreat, ‘Shining a Light in the Darkness’, will take place on Saturday 11th November.

On Saturday 18th November there will be a performance of Handel’s ‘Messiah’, featuring the RTÉ Concert Orchestra, a 180-piece choir with the combined choirs of Our Lady’s Choral Society, Cór Mhaigh Eo and the Ballina Chamber Choir along with international soloists. The concert will be conducted by Proinnsías Ó Duinn and presented by Liz Nolan, from Lyric fm.

Knock Shrine will also host two information evenings in November for parish councils and those involved in ministry in their parish. Another programme is the Parish Conversations on ‘Amoris – The Joy of Love’. The Amoris programme aims to support families and parishes as they set out on the journey of preparation for the World Meeting of Families next year. This event will take place at Knock House Hotel.

The Advent Day of Reflection with Dr Aoife McGrath will offer individuals and groups involved in parish life and ministry the opportunity to reflect on their own faith and the way they serve people at Knock House Hotel.

More information can be found at: www.knockshrine.ie/faithrenewal