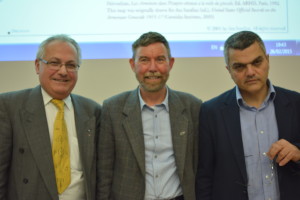 This weekend the Armenian Church in Ireland will commemorate the 100th anniversary of the beginning of the Armenian Genocide.

The Armenian community, which gathers in Taney Parish (Dundrum), will hold a Remembrance Service on Sunday afternoon.

The weekend of commemoration will begin on Friday 24 April with a photographic exhibition in Christ Church, Dun Laoghaire, from 12.30pm until 6.30pm.

At 7.30pm there will be a silent vigil at Dun Laoghaire Pier which will include the release of 100 Chinese lanterns representing 100 years of the unrecognised genocide.

Each year the Armenian Church and nation has a special day of prayer to remember the 1.5 million Armenians who were killed by the Ottoman Turks between 1915 and 1923.

It is a National Remembrance day for all Armenians worldwide.

The 100th anniversary Remembrance Service will take place in Taney Parish on Sunday 26 April at 3pm.

It will be attended by Church leaders.

In November a Genocide Memorial will be erected in Christ Church Dun Laoghaire.

The history of the Armenian Church is almost as old as Christianity itself as according to tradition, two apostles of Jesus, St Thaddeus and St Bartholomew brought the Gospel to Armenia during the second half of the first century.

The Mother See of the Armenian Orthodox Church is based at Etchmiadzin in Armenia.

In Ireland there is only one parish. It was set up in Dublin in March 2011 and is tied to the Armenian Apostolic Church in UK under the supervision of the Primate of the Armenian Church based in London.

The majority of those Armenians living in Ireland carry a family history of the Armenian Genocide. Further information is available at www.armenians.ie.

On 12 April, Turkey recalled its ambassador to the Holy See in response to Pope Francis’ statement in which he described the massacre of one and a half million Armenians a century ago as “the first genocide of the 20th century”.

Speaking at the start of the Armenian rite Mass in St Peter’s, the Pontiff warned that “Concealing or denying evil is like allowing a wound to keep bleeding without bandaging it”.

The Mass, which recalled the centenary of the mass killings by Ottoman Turks, was attended by the President of Armenia, Serž Azati Sargsyan, Catholicos Karekin II, Catholicos Aram I, and Patriarch Nerses Bedros XIX, as well as scores of Armenian prelates and priests.

In a later message to Armenians, the Pope called on heads of state and international organisations to recognise the truth of what happened in 1915-16 and oppose such crimes “without ceding to ambiguity or compromise”.

The Pope also said it was his duty to honour the memory of the innocent men, women and children who were “senselessly” murdered by Ottoman Turks in the genocide.