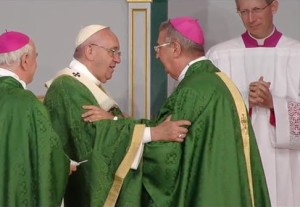 Archbishop Diarmuid Martin of Dublin has said his impression of Pope Francis following their meeting on Sunday in Philadelphia was of “abounding energy” and of the “alertness of his thought”.

Launching a book on Thursday evening by the Church of Ireland’s Rev Gordon Linney, Archbishop Martin paid tribute to the Argentinian Pontiff’s ability to “challenge established wisdom” and to “say things in a different way”.

However, the Archbishop said he also got the impression that the Pope’s willingness to “think anew” within an ever more rapidly changing world, upset some Catholics, and even bishops, who found it hard to accept that Pope Francis could challenge accepted wisdom.

He suggested that they could not see that, in challenging, the Pope was really enhancing what is true wisdom about the family.

“Faith is not about regurgitating perennial certainties. It is about perennially having the capacity to think anew – being challenged even to doubt,” the Archbishop suggested.

“It is about perennially having the capacity to think anew and to think anew within an ever more rapidly changing world, being challenged even to doubt, but as Cardinal Etchegaray said always trying to come out facing in the right direction; not the non-direction of entrenchment in a past which seemed secure but may never have existed, but in renewed thinking, which generates renewed optimism and renewed faith.”

He said Pope Francis spoke about the challenges facing the family, but without falling into an atmosphere either of gloom or of closed ideology.

Commending the Pope for speaking of the family in so many different ways, he noted that when the Pontiff spoke of homelessness, he noted that the principal victims of homelessness and inadequate housing were families and especially young children who become deprived of the possibilities of developing opportunity.

“He spoke of unemployment, noting the effects of loss of work on an entire family. He spoke of migration and of the division of families. He spoke of respect for life at all its stages. He met prisoners, and their families.”

“He took up the theme of family in a language which was understood by the US Congress, the UN General Assembly, visiting Bishops and families themselves.”

Admitting that he liked the title of Rev Gordon Linney’s book, even though at first sight the book might seem to be a look back at past writings and events, he said he saw the title as “an agenda for the future of all our Churches today”.

He recalled 4th October 1962, the day 53 years ago when he entered Clonliffe College to begin his seminary training.

“Even though change was taking place in the world around us, the seminary remained doggedly alien to the ideas of change and doubt. There was one word which we did not hear at all and yet it is a vital word when we come to reflect on faith in today’s world or indeed at any time:  that word was risk.”

The Archbishop said that he receives a large number of letters from people who are unsettled by change and are even angry at change.

“Sometimes I feel angry myself at what they say, but then I have to pause and realise that we, as a Church, have made them like that.”

“We created a climate around faith which generated scruples and failed to free people and give them an experience of a Jesus who liberates us from entrapment and who is there with his mercy to free us once again from entrapment when we fail.”

In his tribute to Gordon Linney, he said his book is an example of someone who never allowed change and doubt to prevent him from thinking anew and expressing that new thinking though the medium of a secular newspaper.

He explained that Rev Linney’s book came to completion in his retirement and in the changed experience of life brought about by the loss of his wife, Helen, to whom the book is dedicated.

“Reading through this collection of past articles from the Irish Times, I came away with the clear feeling that this may be a book of memoirs of a man getting older, but above all that this is the book of a man who will continue to think anew and with that creative youthfulness that the Christian Church needs much more of, especially in times of change and doubt.”