The Anglican and Roman Catholic Archbishops of Dublin joined members of the Jesuit community in Ireland on Saturday for a special Mass of thanksgiving for Pope Francis’ recognition of the heroic virtues of Fr John Sullivan SJ on 8 November 2014.

In his homily at the Mass in Gardiner Street, Archbishop Diarmuid Martin said Fr Sullivan was one who in his own time understood what many decades later the Second Vatican Council would call “the universal call to holiness”.

He said this call to holiness is the fundamental vocation of every Christian, whether lay or cleric.

Fr John Sullivan (1861-1933) was baptised into the Church of Ireland at in St Georges’ Church in Dublin. Archbishop Michael Jackson’s presence at Saturday’s Mass recalled Fr Sullivan’s earlier life within the Anglican Christian community in Ireland.

Referring to the presence of his Church of Ireland counterpart as well as some of Fr Sullivan’s Anglican relatives who travelled from Britain, Archbishop Martin said it was a reminder that “holiness knows no denominational boundaries”.

He continued, “Indeed in our ecumenical reflection and activity we pay too little attention to the fact that Saints can be a bridge between what is deepest and common in all our traditions.”

The Archbishop underlined that ecumenism is not the possession of theologians or activists.

He described Fr John Sullivan’s faith as the product of two traditions and said it always remained so and was enriched by that fact.

“There was nothing that would hold him back from visiting someone
who was sick and who had asked for his prayers.”

“Most of his priestly life was spent among young people and he had a remarkable effect on their lives, as spiritual director, as a teacher and as someone who struck the young people, through the authenticity of his life as a priest and as a person, as being close to God.”

He noted that the former “best dressed man in Dublin” began to attract young people to Jesus Christ through a total renunciation of anything superfluous for himself, thus witnessing to nothing other than the care and loving kindness of Jesus.

“We can so often get excited about programmes and strategies, and fail to realise that it is the integrity of our lives and piety which win hearts,” Dr Martin warned.

He also referred in his homily to Fr Sullivan’s great care for the sick.

“Reading his biographies is like reading a directory of the hospitals and the homes for the sick in the Dublin of his days. There was nothing that would hold him back from visiting someone who was sick and who had asked for his prayers.”

“In his years in Clongowes he would travel by bicycle or on foot when he heard the news of someone who was ill. He was not a medical expert or a faith healer, but a man who through his own prayer and personal holiness was able to transmit to those he encountered something of the healing power and the Good News of Jesus Christ.” 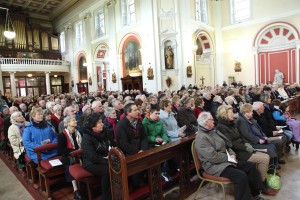 In his after Communion reflection, Archbishop Michael Jackson told the packed church that it was a significant pleasure to be present for this joyful celebration of John Sullivan and to have the privilege of doing so in the presence of members of his family.

“His invitation to all of us gathered here today” the Archbishop said “is to divide equally and not to separate the people and the things that matter most to us – and to do this within a living ecumenism in a modern world which needs the witness of saints on earth and saints in heaven.”

He added that we are called to do this in and through the spirit of God who hates nothing that this God has made.

Speaking after the Mass to www.CatholicIreland.net, Archbishop Jackson explained that he first came across Fr John Sullivan through his alma mater Portora Royal School, Enniskillen, which Fr Sullivan attended.

He added that he believed Fr Sullivan’s importance for Irish society is that he “kind of marks our cards – for us to have an integrated society” and as Ireland makes its way towards its economic recovery, not to forget those who are often overlooked and forgotten.

Jesuit, Fr Barney McGuckian told CatholicIreland.net that 82 years after his death, people still come to Gardiner Street to where Fr Sullivan is buried in vast numbers.

“I am in the church in Clongowes where he spent his life and the activity involving him has trebled since he was made Venerable; people coming looking for blessings, praying for his intercession – so his memory is as fresh today as it was when he died.”

Fr Conor Harper who has worked on Fr Sullivan’s cause recalled the former Church of Ireland Archbishop Simms who on the 50th anniversary of the death of Fr Sullivan explained his enthusiasm for Fr Sullivan to Fr Harper. 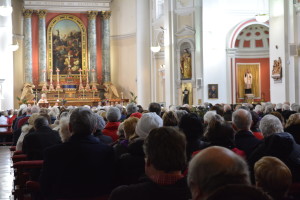 He gave a special word of thanks to the members of the Lloyd family who travelled to attend the Mass and who are the nearest living relatives of Fr John Sullivan.

“Your presence among us is terribly important. We pray that very shortly – hopefully we will be celebrating the next stage in the cause when at last we can declare our beloved John Sullivan to be blessed,” Fr Harper said.

Fr John Sullivan was born on 8 May 1861 at 41 Eccles Street, in the heart of old Georgian Dublin. His father, Edward, the future Lord Chancellor of Ireland, was a successful barrister and was already showing signs of what was to be brilliant success in future life. His mother, Elizabeth Bailey, came from a prominent land-owning family in Passage West, Co Cork.

The Sullivans were Protestant and the Bailey’s were Catholic. John was baptised in the local Church of Ireland parish, St George’s, Temple Street, on 15 July 1861.

It was soon after this that the family moved to 32 Fitzwilliam Place, which was to be the Sullivan home for forty years. John grew up in the gentle comforts and privileges of the fashionable Dublin society of the time, and was raised in the Protestant tradition of his father.

He later studied at Portora Royal School, Enniskillen and Trinity College Dublin, where he studied Classics.
In December 1896, at the age of 35, after some years of soul searching, he decided to become a Catholic. He was received at the Jesuit Church in Farm Street, London.

In 1900 John decided to become a Jesuit and entered the Jesuit novitiate in Tullabeg, Co Offaly.

At the end of his two years novitiate, he took his vows as a Jesuit and then was sent to St Mary’s Hall, Stonyhurst College, England to study philosophy. Already his holiness was obvious to many who lived with him.

In 1904, he came to Milltown Park to study theology, and he was ordained a priest on 28 July 1907. He was then appointed to the staff in Clongowes Wood College, Co. Kildare, where he was to spend the greater part of his life as a Jesuit.

Fr John’s reputation for holiness spread rapidly around Clongowes and the neighbourhood.
Since that time, he has been revered by many as a saint. During his lifetime, many flocked to him in times of trouble and anxiety, confident of the power of his prayers; and that confidence continues. He is still loved and remembered.