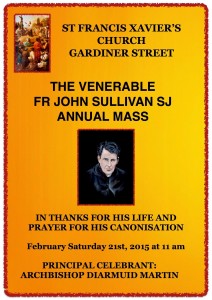 Archbishop Diarmuid Martin of Dublin and his Church of Ireland counterpart, Archbishop Michael Jackson, will attend the opening celebrations to mark the Vatican recognition of the heroic virtues of Fr John Sullivan SJ.

Archbishop Martin will be the main celebrant at the annual Mass in Saint Francis Xavier’s Church, Gardiner Street to honour Venerable John Sullivan’s on Saturday 21 February at 11am, the 82nd anniversary of his death.

A blessing with the crucifix of Fr John will be available before and after the Mass, a ritual which has become a regular part of the monthly liturgies which take place in Gardiner Street Church in thanksgiving for the life of Fr John.

The closing celebration marking Fr John’s elevation to a Venerable in the Church will be a Mass in Clongowes Wood College on Sunday 2 May, and the principal celebrant will be Bishop Denis Nulty of Kildare & Leighlin.

Fr John Sullivan SJ (1861-1933) was a Jesuit priest with a reputation for saintliness and healing.

He was formed in both the Protestant and Catholic traditions, having been brought up in the Protestant tradition of his father before he was received into the Catholic Church and later entered the Jesuits.

Known for his love of the poor, his life of prayer and fasting, and his care of the sick, he spent much of his priestly life in Clongowes Wood College, Co Kildare, where he had a reputation for sanctity among the schoolboys and the many local people he came in contact with. In 1960 he was declared a Servant of God.

He was declared Venerable by Pope Francis in November 2014.

Commenting on the life of Venerable John Sullivan, Fr Conor Harper SJ, the Vice-Postulator for the canonisation cause said, “Fr John showed remarkable holiness and his reputation as a truly saintly person spread far and wide. So there was great devotion to him in his lifetime and that devotion has continued since his death on the 19th February, 1933.”

“Many people believe that his prayers have brought the healing power of God into their lives and his tomb in the Jesuit Church in Gardiner Street is visited daily by those who seek his help.”