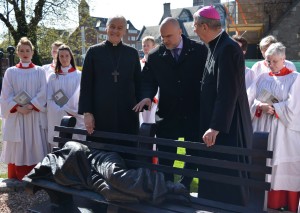 The 21st century hasn’t yet seen an improvement on the 20th century as far as homelessness in Ireland is concerned, the Anglican Primate of Ireland said on Friday, as he unveiled the ‘Homeless Jesus’ sculpture in the grounds of Christ Church Cathedral.

In his address, Archbishop Jackson said the city of Dublin was “honoured and chastened” to be the recipients of sculptor Schmalz’s genius and of the generosity of the anonymous donor who funded the statue.

“I say honoured because of the beauty of the craftsmanship and the trust expressed in the location of Christ Church Cathedral as a place for all the people of Dublin to be and to see; and also a hearth of welcome for hundreds of thousands of international pilgrims and visitors every year.” 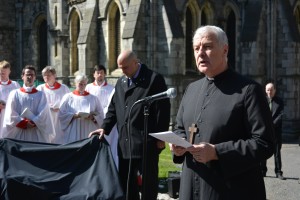 “I say chastened because of the scandalous fact that the relentlessness of homelessness and the statistics of individual homeless people in Dublin in 2015 still merit such a sculpture as a reminder and as a memorial.”

Archbishop Jackson said he saw the work as a testimony to the human spirit of individual homeless people in Dublin and to their capacity for life “in the midst of danger, distress, degradation and deprivation”.

The Archbishop of Dublin & Glendalough said that throughout the world today human beings are subjected to “indignity, homelessness, trafficking and death simply for being alive and getting under the ideological skin of their oppressors”.

“Every day for them is a Good Friday. They wait for the Day of Resurrection in hope and in fear, in trust and in betrayal, in darkness and in light.”

In his address, Archbishop Diarmuid Martin recalled that less than six months ago, the name of Jonathan Corrie was on the nation’s news headlines, the morning after he died homeless on the streets of Dublin. 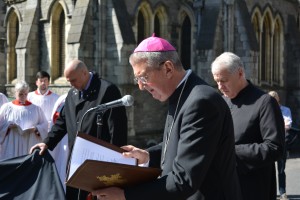 “His death stung consciences. There was anger; there was a genuine mobilisation of resources; there was a commitment that this should never happen again.”

“Much was done, amid an awareness that the challenge of homelessness in this city is a complex one that cannot be resolved overnight.”

However, the problem he noted was that when a challenge is complex and cannot be resolved overnight, it can easily end up as “a challenge answered with plans and promises that are never fulfilled.”

Referring to the bronze work, Archbishop Martin said it was a reminder to the entire community – Catholics and Protestants, people of faith and people of none – that as long as there are people who cannot find a suitable roof over their head and families without a place where they can live with dignity, then none of us can roll over in our comfortable beds with an easy conscience.

“Conscience, public opinion and political commitment must be kept alert every day and never settle back into thinking we have done enough,” he warned.

Acknowledging that there had been a genuine attempt to provide services to alleviate an emergency situation, Dr Martin criticised how some families and children have to wait years in single hotel rooms and he asked, “Is this emergency ever going to end?”

He also expressed concern over the possibility of a ramping up of house repossessions, and the implications of the coming tourist season during which the hotels currently used to house the homeless would no longer be available.

“All indicate that in the coming months existing services will experience enormous strain,” he said.

The Archbishop underlined that the Homeless Jesus is not a “normal statue”.

“It is a beautiful work which is not created to be looked at and admired; it is an image which should make us turn away from it,” he said and added that for a Christian, the homeless are not just statistics; “our belief recalls that the plight of the homeless is our plight”.

He said the sculpture should prompt people to think of the many park benches, the many doorways, the many sheltered corners where Jesus lies homeless every day and every night. 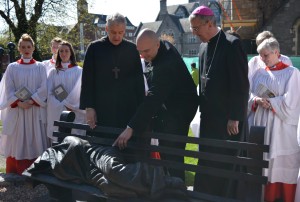 Sculptor, Tim Schmalz, a Canadian Catholic, said he had passed by three homeless people on his way up to the unveiling ceremony in the grounds of Christ Church Cathedral.

His search for an Irish location for his work began in the very week in which Jonathan Corrie died on the streets of the capital. “It was a horrible irony but just confirmed the need for awareness,” he said.

Speaking to CatholicIreland.net, Hilary Abrahamson of the Jewish community called for NAMA properties to be adapted to house the homeless.

Separately, Archbishop Jackson underlined that homelessness is tremendously complex. “There are some people who are on their own on the streets and there those who are in families on the street and who do not have a house.”

“We are told that there is a rising tide. My argument would be it doesn’t lift all boats and I think Pope Francis would be very clear about this; people who are poor and people who are actually at the bottom of the wealth explosion remain at the bottom,” the Archbishop said.

He added, “We need to be equipping and empowering of communities locally to do practical things which cannot be done from behind an ipad or sitting at a desk.”

On the issue of increased employment, Dr Jackson warned, “It is not simply about finding new jobs but bringing people back into the workforce – people who now maybe feel themselves relieved and delighted to have two days a week whereas before they had five.”

“We need to reconnect the dignity of independent living,” he said.