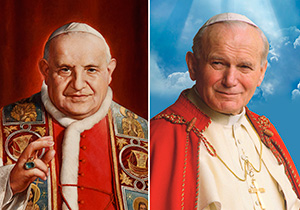 “We celebrate two new saints. We do so thanking God for the gift of holiness they represent,” Archbishop Diarmuid Martin of Dublin has stated in his Mass celebrating the canonisations of John XXIII and John Paul II.

In his homily, the Archbishop, who worked in the Vatican under the Polish pontiff, gave thanks to God for the gifts which the two Popes brought to the Church – their incessant dedication and prayer for the Church at times of rapid change in the Church and the world.

He said he would not respond to the polemics of those who caricature Pope John as the Pope of the Vatican Council and Pope John Paul as someone who wished to roll back the Council.

“Those who talk like that fail to understand not just the two Popes, but the Council itself and the Church itself,” he criticised.

Archbishop Martin recalled that at the time of Pope John Paul II’s election, he was a very junior Vatican official.

“Within a short time I was beginning to have closer contact with that Pope who was to ordain me bishop in 1999 and at whose wish I was to become Archbishop of Dublin ten years ago, yesterday.”

He said he was in St Peter’s Square for the announcement of the election of Pope John Paul II. “It was a surprise and very few could have imagined the extraordinary effect that this young Pope – he was only 59 years old at the time – was to have on the Church and the world.”

He noted that although John Paul II was the first Pope to journey to so many countries in all continents, he rarely missed a Sunday visit to a Roman Parish. “He was very much the Bishop of Rome.”

Recalling the election of John XXIII in 1958, when he was just thirteen years old, he said that as Telefís Éireann began in 1961, his family were reliant on their aerial picking up the BBC.

“Much of my homework was done watching television and that’s what I was doing late one autumn evening in 1958 when BBC television interrupted its programming to bring the announcement of the new Pope.”

When his parents returned home they asked him what his impressions were of the new Pope.

“I honestly had to say that I was slightly bewildered. After the severe and austere figure of Pope Pius XII, as we had known him through photographs and occasionally on filmed newsreels, this rather corpulent and jovial new Pope seemed to me anything but ‘Pope-like’.”

The Primate of Ireland also warned that there was a danger that, with the entire world watching and observing, commenting and interpreting, “we might become so caught up in the mechanics and externals of the canonisation event that we will fail to see what holiness really means.”

He added, “Saints are men and women who in their day to day ordinary lives try heroically to live the Christian life. Saints are not men and women taken out of human history and human realities, but are witnesses as to how we should try to live of humanity. They are not perfect witnesses. God alone is holy.”

The Archbishop said one of the most significant texts of Vatican II and one often overlooked is the chapter in the Constitution on the Church, Lumen Gentium, on the ‘Universal Call to Holiness’.