Home > News > Archbishop pleads for safety on the roads

Archbishop pleads for safety on the roads 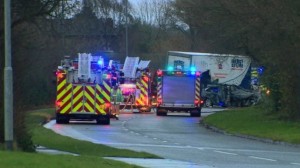 Archbishop Eamon Martin of Armagh has pleaded with road users across the island of Ireland to slow down and take greater care not to endanger their own lives or those of others.

His plea was made as the minister responsible for road safety in Northern Ireland called a meeting for Tuesday to address the high number of road deaths which have already occurred this year.

The first ten days of January have seen five fatalities which is the same toll for the whole of January 2013 according to the PSNI.

In his message on Sunday, Archbishop Martin called on all road users to “mind yourselves on the roads”.

Speaking at Mass in the Church of the Immaculate Conception in Armagh, Archbishop Martin encouraged everyone to consider a late New Year’s resolution to take extra care on the road.

We all have a responsibility to exercise care and attention on the roads, he said.

In his homily, the Archbishop recalled that when he was growing up, his mother always sprinkled holy water as he and his siblings left the house.

“It was a reminder of our baptism and also a prayer for God’s protection on me and my brothers and sisters.”

His mother would often say “Mind yourselves on the roads”.

Addressing the congregation on the feast of the Baptism of the Lord, Dr Martin invited people to restore this tradition in the homes of Ireland.

He also invited people to offer the following prayer when getting into the car: “Keep me safe on the road this year, Lord. Help me not to speed or do anything to put my life or others’ lives in danger.”

Tragically 246 people were killed on the roads of Ireland, North and South, during 2013.

Referring to some of the “gruesome television advertisements” about road safety, the Archbishop said they reminded us that speed, lack of concentration, use of alcohol or drugs can seriously increase the chances of killing or injuring someone else or ourselves when driving.

“If all of us made a late New Year’s resolution to improve our use of the roads, whether that be as drivers, pedestrians or cyclists, then some families will be spared the terrible anguish of losing a loved one this year,” he said.

The meeting was organised after a senior police officer said NI was facing a “road safety emergency”.

Speaking to BBC Radio Ulster, Mr Durkan said he would be looking to hear from agencies as to what they feel they can do to promote road safety even further.

At a press conference on Saturday, PSNI Supt David Moore said someone had died on Northern Ireland’s roads every 48 hours in the early days of 2014.

“That’s a month’s worth of carnage in a little over a week and five families torn apart,” the PSNI spokesman said.