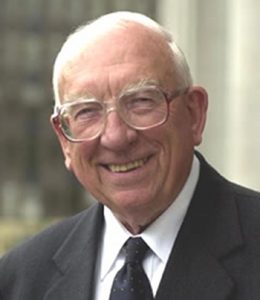 Dr Ken Whitaker, the man described as the most influential public servant in the history of state, was a public servant, “not by virtue of a title or a profession, but by virtue of his willingness to place his talent at the service of the wider public and the common good,” said Archbishop of Dublin Diarmuid Martin.

“He was a servant not just in the years of his professional life. He placed his talents at the disposal of many aspects of life and society and indeed within the Church.”

The Archbishop was speaking last night at the reception of the remains of Dr Ken Whitaker at the Church of the Sacred Heart in Donnybrook, Dublin.

Ken Whitaker died on Monday, aged 100. Originally from Rostrevor, Co. Down, the family moved when he was six to Drogheda, where his father worked in a local mill.

His family could not afford to put him through university, so when he came first in the clerical officer examination, Ken Whitaker joined the civil service, rising swiftly through its ranks.

A man of intelligence and integrity, by the age of 39 he had reached the pinnacle of the service and, having studied economics, he wrote the blueprint for economic stability, a paper called ‘Economic Development’, which became known as ‘The Grey Book’.

This analysed every aspect of Ireland’s economic woes, from agriculture to tourism, and formed the basis of the Programme for Economic Expansion which set out the steps to recovery. In later life Mr Whitaker was Governor of the Central Bank and a senator. He was a strong advocate for the Irish language.

At Mr Whitaker’s removal last night, Archbishop Martin remarked that economics was not just an intellectual discipline about the proper utilisation of resources. “It is a moral science, driven by service always prioritising the good of the human community.”

Ken Whitaker revolutionised the Irish economy, he said, “not through being a proponent of this or that economic theory, but through focusing economic reflection on what it really should be about: the good of men and women and children of this country in their fight for a better life, for their dreams of being freed from deprivation, poverty, lack of employment opportunities, and of the possibility of achieving these basic human dreams without having to leave their country.”

He continued: “Ken Whitaker was a man of intelligence and creativity, but he was above all a man of integrity and therefore a free man, with an integrity never constrained by party allegiance or personal gain. Integrity and freedom belong together. True freedom always comes with a price and integrity is the fruit of using freedom not for personal advancement but to make society and the lives of others free.”

The man once voted Irishman of the 20th century was also a man of faith, but here too he was “a free man in his belief,” the Archbishop said. “He was not afraid to express his difficulties with his Church, especially where the Church might have failed in its own duty of integrity. Faith is not certainty and he was not afraid to address those doubts that belong to anyone who searches for the truth and for a faith which liberates.

“God blessed him with a long life, a full life and above all a good life in the true sense of that word, a life of seeking what goodness means, what truth and integrity mean.” The Archbishop said he wished that the life of Ken Whitaker might “inspire many young people to look to the vital value of public service, lived with integrity and imagination, humility and creativity.”