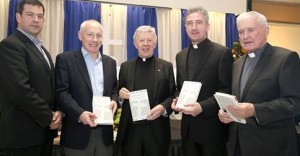 The Archbishop of Tuam paid tribute to “one of the most powerful communicators of God’s Word in our time” on Saturday as he launched a collection of Fr Tommy Waldron’s writings from the Furrow magazine.

Archbishop Michael Neary recalled how in 1950 the religious periodical began as a monthly journal for the contemporary Church.

It was the brainchild of the late Tuam priest Canon J. G. McGarry who was based in Maynooth.

At the time, the late Fr Tommy Waldron was a student in Maynooth and was just about to commence his theological studies.

Four years later, he was ordained a priest for Tuam and if he were still alive today he would this year have celebrated the diamond jubilee of his ordination.

In his address, Archbishop Neary said his archdiocese had contributed so much to the success of The Furrow through Frs Enda McDonagh, Tommy Waldron and Canon Padraic O’Connor who is a member of the Furrow Trust.

He said it was very appropriate that the launch of ‘Earthing the Word: Selected Writings from the Furrow’ by Fr Tommy Waldron with an introduction by Fr Enda McDonagh was taking place in the diocese.

The book is published by Columba Press.

“Tommy, because of his energy, wit and literary flare enabled Christ’s word to speak to all of us,” Dr Neary said.

Fr Waldron spent many years in formal education as a teacher in Presentation College, Headford and St Jarlath’s College and later became President of St Jarlath’s.

But according to the Archbishop he “realised that real life meets us in the market place, in hospital beds, in broken homes and breaking hearts, where love and hate, sin and grace come face to face.”

“Tommy was conscious of and recognised the importance of scripture and theology in the search for God and the human person as we reflected on experience,” he said.

He said the priest’s writings “enables us to reflect on and articulate our struggle as we experienced bewilderment and confusion. He recognised the role of the homily giving expression to the faith of the people in a very personal manner.”

In his address, the Archbishop described Fr Waldron as “a wonderful weaver of words.”

“While others excelled in the sound-byte, Tommy was unique in his ability to paint word pictures and boy did they come alive with the gentle but generous stroke of his brush. In him words became flesh. It was incarnation over and over again.”

“He recognised that language enabled us to speak to God and so treated it with such devotion and care. He used words to explain, expound, exhort and evoke, to set us dreaming as well as thinking. He takes us by surprise.”

He said the Tuam priest knew what the issues are, the questions being asked which define the contemporary culture and had an extraordinary ability to read, listen and participate in the world in which we live.

Because he was impatient with abstraction and generalisation he was conscious of where people are hurting, what are their hopes, their needs for joy, Dr Neary said.

“As we listen to or read his homilies it is as if he is speaking from living experience in today’s world, has tested beliefs in the crucible of suffering, and is speaking of a living God and not a dead dogma.”