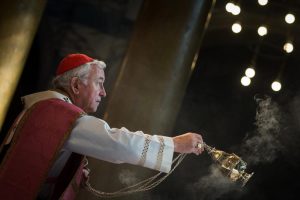 Cardinal Vincent Nichols, Archbishop of Westminster, expressed his shock at the terrorist attack that brought “horror and killing” to London’s streets.

In a letter to priests and parishioners of the Diocese of Westminster he also urged them to pray at the weekend’s Masses for the victims of the attack.

“Let our voice be one of prayer, of compassionate solidarity, and of calm. All who believe in God, Creator and Father of every person, will echo this voice, for faith in God is not a problem to be solved, but a strength and a foundation on which we depend,” he stated in his letter.

He asked for prayers for Aysha Frade, a mother of two who was knocked down by the terrorist when she was en route to collecting her children from their Catholic primary school.

The Archbishop also called for prayers for PC Keith Palmer, who died while protecting those in the Houses of Parliament, for the injured young French students, and for all those who were injured and those who care for them. 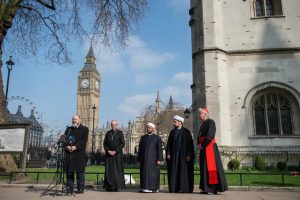 On Friday the Cardinal was among religious leaders who gathered for a vigil for the victims of Wednesday’s attack in Westminster. The Most Revd Justin Welby, Archbishop of Canterbury, also addressed the crowd, followed by the Chief Rabbi Ephraim Mirvis, Sheikh Khalifa Ezzat, Chief Imam of the London Central Mosque, and Sheikh Mohammad al Hilli, an Islamic leader and speaker (Shi’a).

Cardinal Vincent Nichols prayed for the victims and passed on a message of support from Pope Francis. The Holy Father had sent the message to the Cardinal, assuring the British nation of his prayers after the terror attack in Westminster. The message, communicated via the Holy See’s Secretary of State Cardinal Pietro Parolin, commended those who died to the loving mercy of Almighty God, as Pope Francis invoked “divine strength and peace upon their grieving families”.

The Most Revd Justin Welby, Archbishop of Canterbury, said that they had come together for the vigil which was a moment of sad reflection but also a moment of “determination for our nation together”.

“In standing here we represent the three Abrahamic faiths all equally committed to a peaceful future,” he said.

He repeated words he spoke in the House of Lords, stating: “We find both a God who is with us in sorrow and a God who conquers the despair and destruction that the events of Wednesday speak of.”

Chief Rabbi Ephraim of the United Hebrew Congregations of the Commonwealth said that terrorists seek to instil fear and terror into hearts and minds, and to divide.

“We stand here together, leaders of Christianity, Islam and Judaism. We have come in friendship on behalf of our communities,” he said. “We proclaim no person and no event will drive a wedge between us; together we will prevail.”

Sheikh Khalifa Ezzat, Iman of London, condemned the attack, and described the killers as “criminals” that should not be linked with any religion or with Islam.

“Islam and all religions call for peaceful co-existence,” he said. “They want to divide us; we are here together to stand together, show solidarity and to show co-operation in facing those people who commit those crimes.”

Sheikh Mohammad al Hilli, Islamic Leader (Shi’a), said: “He who kills any human being unjustly it is as if they have killed all of humanity – the Holy Quran chapter 5 verse 35.”

He said that the Muslim community was present to denounce any form of terrorism and violence. “As Muslims we strive to espouse and spread the beautiful teachings of peace, love, co-existence, and compassion, and indeed encourage people to take an active part in making our society and our great country a beautiful place and to serve others and to make a positive contribution to society.”

The gathering concluded with a minute’s silence.