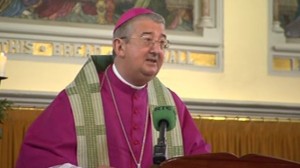 Violence leads to further violence as well as grief and degrades and brings shame on its perpetrators Archbishop Diarmuid Martin of Dublin has said.

Speaking in Lourdes on Wednesday, the final  day of the annual Dublin diocesan pilgrimage, the Archbishop warned that, “Vendetta generates further vendetta and leaves both the perpetrators and the community less secure.”

He was responding to the spate of attacks in the capital which over a 48-hour period saw, among other incidents, a vicious stabbing on the streets in the early evening, a security guard held at gunpoint and the discovery of a pipe bomb in a graveyard.

Referring to some of the recent murders elsewhere around the country, Archbishop Martin appealed: “In these days we have shared here in Lourdes an extraordinary experience of peace.  This contrasts with the constant news we receive about the violence of shootings and stabbings that marr the life of the streets of Dublin and around the country,” he said.

He said such horrendous violence can become so commonplace that we become anaesthetised to it and it acquires for its perpetrators a warped sense of celebrity. “Nothing could be farther from the truth,” he commented.

The Archbishop urged communities to raise their voices “unambiguously to condemn those behind this violence.”

“Never give up hope; never give in to cynicism and compromise. The Lord works through us and with us in our weakness,” the Archbishop explained.