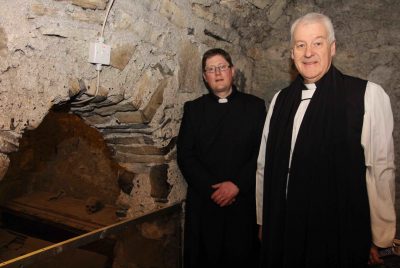 Archbishop Michael Jackson of Dublin and Glendalough on Thursday reconsecrated St Michan’s Crypt and dedicated a community garden in the grounds of the inner city Dublin parish.

The church was founded in AD 1095 and is renowned for its interior and for burial vaults containing the mummified remains of many of Dublin’s most influential families buried there between 1600 and 1800.

They have since been recovered by Gardaí.

On Wednesday, President Michael D. Higgins and Sabina Higgins visited St Michan’s to see the damage done and to express their support for the parish.

They were given a tour of the historic church and its crypts.

On Thursday, reconsecrating the crypt, Archbishop Jackson said prayers at the entrance and in the crypt itself so that those who had lain there for many years could once again be at rest.

The service was attended by parishioners, representatives of the local community and the Gardaí, including those who led the investigation into the theft from the crypt.

Afterwards, Dr Jackson dedicated a new community garden in the churchyard of St Michan’s. A special green space has been turned over to the garden and raised beds will be kept by the parish, local schools and Church Street Community Garden.

The project is the brainchild of the Rev Ross Styles, Curate of the Christ Church Cathedral Group of Parishes, who has a background in horticulture.

“There is very little green space in this area and the churchyard of St Michan’s provides a beautiful green oasis.”

He thanked Caoimhe Leppard, project coordinator at the Archbishop’s office, and Allchurches Trust for their help in securing funding.

Commending the project, Archbishop Jackson said, “The wonderful thing is the way in which in the midst of such business and sophistication there is a reconnection with the earth here. To see a green space and to use it in this way is wonderful. It draws together a range of the Five Marks of Mission but particularly nurturing and care of the creation and it is in the middle of an area dealing with justice,” he said.