A “huge new generation is emerging whose faith has to be nourished in a new way”. 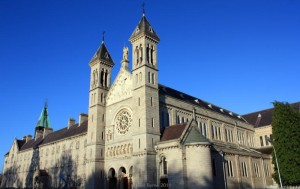 Archbishop Diarmuid Martin of Dublin has expressed his horror at the reports of Christians being crucified in the Middle East by militant Islamist groups such as IS.

In his homily to mark the 40th anniversary of the parish of the Church of the St Paul of the Cross, Mount Argus in Dublin, the Archbishop stated, “All of us are horrified today when we hear news of people being crucified in our times. It is an atrocious form of punishment.”

Explaining the Church’s celebration of the Feast of the Exaltation of the Holy Cross, the Archbishop said the Cross is central to an understanding of the Catholic Faith.

He noted that the Cross was an infamous instrument of torture and punishment, considered in its time “a punishment for those who had been cursed by God or who were a toxic danger to society”.

Yet for Christians, he said, this instrument of horrifying death is celebrated as a totally different reality. “For the Christian, the Cross is an instrument of salvation,” he said.

“Rather than being considered an instrument of cruel punishment, the Cross of Jesus Christ has become something which reveals the love of God and the depth of that love.”

Elsewhere in his homily, Archbishop Martin spoke about the nature of a parish, in the context the parish of Mount Argus’ 40th anniversary.

A parish is not something that is anonymously carved out on a map, a purely canonical or administrative creation, he warned.

“Parish life is focused on the celebration of the Eucharist, the mystery of Jesus’ Cross and Resurrection. The life of a parish is then formed through the life of the Sacraments, through which faith in Jesus enters into our hearts,” he said on Sunday.

He said forty years ago any Dublin parish was outwardly very different to what it looks like today and parishes are still changing today.

“When I visit parishes I look out to see originally how many confessionals were in the parish church. Today a parish which might have had eight confessionals may now only have one priest.”

The life of a parish changes with the changes of the times. Some of that change – such as the dramatic reduction in the number of priests – is distressing.

He stressed that the life of parishes today flourishes in a way which perhaps did not happen in the past.

The Archbishop highlighted that the parish of the future will look different. “There will be a much greater participation of the entire community of believers, each exercising his or her specific role and calling fully and never just as a passive sleeping member as if in a club or organisation.”

According to Archbishop Martin, the centre of Parish life is always the celebration of the Eucharist and the other sacraments should normally take place within that celebration or with a clear focus on their link to the Eucharist.

“But today there is a call to new forms of mission, new ways of reaching out beyond the Church doors to bring the saving message of Jesus to those whose faith has become shallow and less relevant to the way they consider their lives.”

Referring to the fact that almost 16% of the population in the archdiocese of Dublin is under the age of nine, Archbishop Martin said a “huge new generation is emerging whose faith has to be nourished in a new way.”

In that context, every parish should be reaching out to young people, he suggested.

“I said last week to the hundreds of young helpers with us on the Dublin Diocesan Pilgrimage to Lourdes that very often the Church has failed to listen to young people and that I want to hear their views on the Church and on faith,” he stated.

“Their response was positive and I gave them an email contact with which they can dialogue directly with me. We have to show young people that the Church is interested in them and has confidence in them as they prepare to live in a future which is their world,” he said.