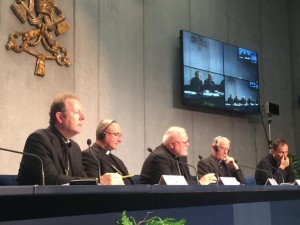 Archbishop Eamon Martin of Armagh at the Synod press conference in Rome on Wednesday.

“If our pastoral practice does not allow us to deepen and shape our understanding of the teaching of the Church then we become distant and removed,” Archbishop Eamon Martin said as he concluded his contribution to Wednesday’s press briefing for the Synod on the Family in Rome.

He said the synod on the family had allowed participants to “understand a little bit more of what that ecclesia docens and ecclesia dicens is all about”.

Archbishop Martin reminded the press conference that this was his first Synod and that he had found it to be a “marvellous experience.”

He thought that the delegates were finding a real convergence which was built upon common hopes and struggles.

The Primate of All Ireland spoke of the importance of accompanying the vocation of marriage just as the Church accompanies vocations to the priesthood and religious life.

According to Archbishop Martin there are two things that were most important: first, to pray for families and secondly, that the Church offers positive and clear guidance on its teaching on the family.

On Monday and Tuesday the Synod Fathers examined the third part of the Instrumentum Laboris, which deals with, among other themes, irregular family situations, admission of divorced and remarried faithful to communion, the pastoral care of homosexuals, and responsible parenthood.

The group co-led by Archbishop Eamon Martin and Australian Archbishop Mark Coleridge did not support the proposal for a penitential path for divorced and remarried Catholics but called for an affirmation of the Church’s current discipline on the matter.

The English language small group co-led by Archbishop Diarmuid Martin and Cardinal Vincent Nichols has proposed a four step process of “reverential listening” to those who are divorced and remarried.

The group also requested that Pope Francis establish a commission during the upcoming Jubilee Year of Mercy to study “the ways in which the disciplines of the Church which flow from the indissolubility of marriage apply to the situation of people in irregular unions.”

The group of German speaking bishops, which included Cardinal Walter Kasper, Cardinal Gerhard Müller, Cardinal Christoph Schönborn and Cardinal Reinhard Marx suggested that some divorced and remarried Catholics might be allowed to take Communion in the Church through what is termed the ‘internal forum’.

This would allow some who have remarried to take Communion on a private, case-by-case basis after seeking guidance, advice, and then permission from priests or bishops.

Today, the synod meets for two open sessions, where delegates may be presented with a first draft of a possible final document which they will debate before providing amendments. There may be further discussions of the German group’s proposal.

Separately, Archbishop Eamon Martin was asked about the role women played in the small group discussions.

Deborah Rose Milavec of FutureChurch in the US asked Archbishop Martin about comments made by American Sacred Heart of Mary Sister Maureen Kelleher’s comments about the divide between bishops and laity in English Group D.

Speaking to the National Catholic Reporter, Sister Maureen said at times she faced condescension so heavy you could cut it with a knife.

Deborah Rose Milavec asked Archbishop Martin about the four women in his group and whether they had experienced the same dynamic as the women in group D.

Admitting he was “sad” to hear about Sister Maureen’s experience, Archbishop Martin said that in his group there was “a great richness and diversity brought by the presence of women”.

He said that women participated fully and frankly, and there was no distinction made between their contributions and those of others.

“There was a particular richness in the group by the presence of some of our lay auditors and experts and by two fraternal delegates, from the Church of England and the Methodist tradition.”

“I think the women participated fully and frankly and very helpfully to our discussions. I am sorry to hear about Sr Maureen’s experience. Certainly we were very blessed in that we had a married couple in the group and on several occasion they spoke about their children, they spoke about having the experience of disability in their family,” Archbishop Martin said.

“They were essentially equal contributors to our group because at no point did we ever really make a distinction between the Synod Fathers in our group and our assistants and helpers.”

“I suppose there is a distinction in the synod process in regard to voting but I would be fairly confident that the views of all the participants in our group were taken into account.”

The synod will end on Saturday with a final vote on the document and it may see an address by Pope Francis.