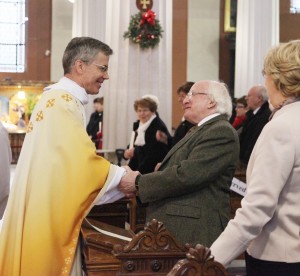 In his homily for World Day of Peace at Dublin’s Pro Cathedral, the Primate of Ireland warned that society has become “almost immune to the figures and statistics of war.”

Addressing President Michael D Higgins and representatives of the Government and the diplomatic corps, Archbishop Diarmuid Martin said day after day, we heard terms such as “millions” and “hundreds of thousands” in relation to the conflict in Syria.

He regretted that the list of conflicts is long and that many conflicts – especially in Africa – barely even make the radar-screens of our news headlines.

No one is spared, the Archbishop underlined and added that the children of wars are among the largest group of victims who have appeared on our television reviews of the year 2013.

Preaching on Pope Francis’s chosen theme, Fraternity, the Foundation and Pathway to Peace, Archbishop Martin said, “These children would wish to dream of peace, but most likely they pass their nights with nightmares of what they have experienced and what they fear.”

He paid tribute to those who are prepared to risk their own lives to prevent conflict and maintain a fragile peace. “This morning we remember in our prayers all the members of our own Defence Forces who continue to witness to the extraordinary tradition of this country in peace-keeping,” he said.

The Archbishop also paid tribute to members of An Garda Síochána, development workers, missionaries and religious, diplomatic representatives and many others “who work quietly to leave a distinctive Irish imprint on working for peace.”

Archbishop Martin observed that peace is too important to be left just to the professionals. 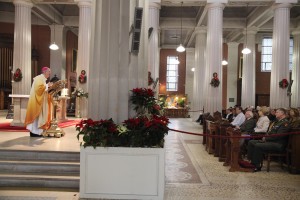 He continued, “It is communities that make or break peace.”

“We need to develop at all levels, beginning in our own hearts, a deep culture of fostering peace and reconciliation and coming together in the realisation that we need each other and that difference must not be a source of hatred and division, suspicion and fear, but something which enriches, something indeed which belongs to being a human person.  When God created humankind he created us as a family.”

That is why Pope Francis chose for this year’s World Day of Peace the theme: “Fraternity, the Foundation and Pathway to Peace”.

Warning that globalisation could be a process of ensuring that the marginalised become protagonists of an economy which serves human development, he criticised the protectionism which divides humankind and tends to privilege and prioritise ourselves to the detriment of the talents and the hopes of others.

“Globalisation can easily just become the extension of personal egoism and the maintenance of privilege,” he warned and said a different model of globalisation is possible if we recognise, as Pope Francis writes, that “human beings need and are capable of something greater than maximising their individual interest”.

The aim of modern society must be “to permit everyone to recognise in the other a brother or a sister to care for and to work together with in building fulfilling life for all”.

Fraternity, Archbishop Martin commented, like charity, begins at home.  Not in the sense of looking after ourselves first, but in the attitudes of our hearts.

Fraternity and the ensuing peace it generates start in the climate we create around ourselves and in our society. 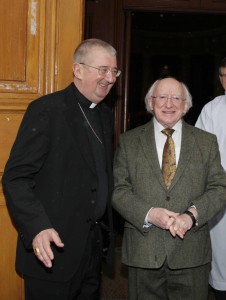 Referring again to Pope Francis, the leader of the Church in Dublin recalled that the Pope had surprised the bishops and cardinals of the Roman Curia when he received them just before Christmas and reprimanded them over gossiping.

“For gossip is harmful to people, harmful to our work and our surroundings,” he said.

“A peaceful climate in our homes and in our society will only be created when we realise how much our insensitivity can hurt and harm others. Pope Francis has indeed won respect by his ability to show respect towards those with whom he may not agree.”

“Fraternity obliges us to act in the same way.  Cynicism and insinuation are not the paths to a peaceful and harmonious society,” he said.

The main celebrant at Wednesday’s Mass was the papal nuncio, Archbishop Charles Brown.