Home > Featured > Apostolic exhortation on the Amazon due on Wednesday

Apostolic exhortation on the Amazon due on Wednesday 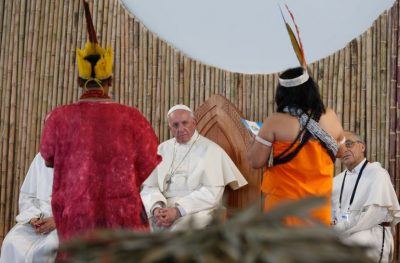 The Vatican has announced that Pope Francis’ much anticipated apostolic exhortation on the Amazon region will be unveiled next Wednesday 12th February 2020.

The Synod of Bishops on the Amazon met in Rome between 6-27 October 2019 to discuss the pastoral and ecological challenges facing the church in the region, which stretches across nine countries.

The focus of much of the discussion at the synod was the environmental issues in the region and the rights of indigenous peoples.

As the Synod concluded, the Synod Fathers produced a series of recommendations and Pope Francis pledged to respond to these proposals.

The apostolic letter was written in Spanish and is reportedly entitled ‘Dear Amazon’.

On Wednesday afternoon, Cardinal Lorenzo Baldisseri, secretary general of the Synod of Bishops, and Cardinal Michael Czerny, special secretary of the Amazon synod, will hold a press conference in the Vatican to present the document.

The press conference will also be addressed by Fr Adelson Araújo dos Santos, a theologian and professor at the Pontifical Gregorian University, who was a participant in the synod.

One of the issues eagerly anticipated is the Pope’s response to the Synod’s recommendation that married men – viri probati – be ordained to ministry in order to provide the sacraments to the faithful in this sprawling area of Latin America, where people sometimes only see a priest once a year, due to the shortage of vocations.

Another issue of particular interest is whether the call for the ordination of women as deacons is addressed and what response the Pope has given.

Though Pope Francis was recently reported to have reiterated his support for clerical celibacy in a forthcoming book, leaked reports from the Vatican on a draft version of the Amazon exhortation suggest that the Pope’s response on the ordination of married men for the Amazon is that “the competent authority should establish criteria and provisions to ordain” them to the priesthood.

The Church currently has married priests in its Eastern Churches and it has also accepted married clergy via the Ordinariate.

Last month, news that the retired Pope, Benedict XVI, had written a chapter in a new book defending mandatory clerical celibacy caused uproar, as it was perceived as an attempt by Francis’ predecessor to sway his deliberations on the call by the synod to ordain married men for the Amazon.

The book, ‘From the Depths of Our Hearts’ consists of this chapter by Benedict while the rest is written by Cardinal Robert Sarah. However, the French publishers jointly credited both the retired pope and the Guinean prelate as co-authors.

On 13 January, Cardinal Sarah tweeted a series of letters from Benedict XVI, that appeared to show that the pope emeritus wrote the chapter attributed to him and authorised its publication.

The introduction to the book says it arose from a series of meetings in recent months between Pope Emeritus Benedict XVI and Cardinal Sarah, “while the world was echoing with the din created by a strange media synod that overrode the real Synod.”

Cardinal Sarah was among the Amazon synod participants opposed to a relaxation of the discipline on celibacy to allow married men to be ordained for the Amazon region in response to the lack of vocations.