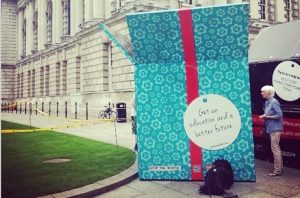 This morning the people of Drogheda will be greeted by a giant Gift Box on the concourse in front of St Peter’s Church on West Street as part of a nationwide campaign to highlight the issue of people trafficking.

The Gift Box project is an initiative which began with the Loreto Sisters’ pledge at their general chapter in 2014 to do whatever they could to combat trafficking, which Pope Francis has described as a new form of slavery.

One idea which emerged within the Loreto Sisters in Ireland was to bring the Gift Box around the country as a way of raising awareness of the issue of trafficking among the public.

The idea was taken up by the umbrella group of religious orders campaigning on this issue – Act to Prevent Trafficking (APT).

The walk-in piece of public art is intended to get people’s attention and its gift box exterior symbolises the way traffickers entice their victims with false promises.

Inside the box, true stories of human trafficking are recounted. To protect the identity of the victims, names have been changed.

Sr Elizabeth Byrne IBVM, who first mooted the idea of bringing the Gift Box to Ireland, told CatholicIreland.net that the initiative is launched today – Ash Wednesday – in Drogheda, and the Medical Missionaries of Mary (MMM) are hosting the event in conjunction with St Peter’s Parish. 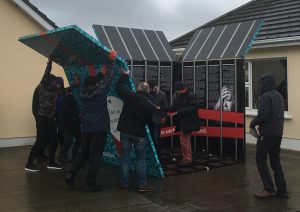 Later, the Gift Box will move to Dublin, where it will be located outside the Central Bank and also at DCU.

It will travel to Kilkenny, Limerick, Tralee, Galway, Athlone and Dundalk before it goes back to Belfast.

The month-long awareness raising tour by the Gift Box is based on the initiative first launched by ‘STOP THE TRAFFIK’ (UK) at the Olympics in 2012.

The Irish initiative has the support of ‘No More Traffik’ (Northern Ireland), the Department of Justice and Equality (Republic of Ireland) and the Garda Anti Human Trafficking Unit.

“We have been working with the Department of Justice and the Garda Anti Trafficking Unit and they are behind it and fully endorsing it as they think it is a great opportunity for the general public to be more educated about the signs of human trafficking,” Sr Elizabeth said.

She paid tribute to the Government’s efforts to eliminate trafficking in Ireland. Acknowledging that the problem isn’t found on the scale here as it is in other countries, she said the Government wants to ensure that it doesn’t get to that scale. “Sex trafficking has probably been the biggest form of trafficking.”

Referring to the passing of the Sexual Offences Bill, which criminalises the purchase of sex, she said she hoped it would deter traffickers from trying to traffic people into Ireland.

Based on the 17,752 victims detected in 85 countries in 2014 for which sex and age were reported, a clear majority were females – adult women and girls – comprising some 70 per cent of the total number of detected victims.

Females have made up the majority of detected victims since data collecting on trafficking in persons began in 2003 (2016 Global Report on Human Trafficking: UN Office on Drugs and Crime).

Children remain the second most commonly detected group of victims of trafficking globally after women, ranging from 25 to 30 per cent of the total over the 2012–2014 period. 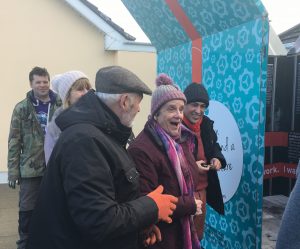 This represents a 5 per cent decrease from 2011 – largely due to reductions in the number of boys detected in 17 reporting countries.

The age profiles of the detected victims vary significantly by region. For instance, countries in Sub-Saharan Africa detect, by far, more child victims (64 per cent) than adult victims.

Countries in Central America and the Caribbean also mainly detect child victims. The wealthier countries of North America, Europe and the Middle East, on the other hand, typically report relatively small shares of child victims (20–25 per cent) (2016 Global Report on Human Trafficking: UN Office on Drugs and Crime).

In 2012 it was estimated that at least 20.9 million people were victims of forced labour worldwide. The research estimated that victims of trafficking comprised some 44 per cent of this figure (International Labour Organization 2012 Global Estimate of Forced Labour).

65 per cent are EU citizens and figures for 2010–2014 show registered victims coming from Romania, Bulgaria, the Netherlands, Hungary and Poland. Non-EU victims come from Nigeria, China, Albania, Vietnam and Morocco.

Ireland is a destination and source country for women, men and children subjected to sex trafficking and forced labour – including forced criminal activity.

Authorities reported an increase in suspected victims from Nigeria and Romania. Irish children are subjected to sex trafficking within the country.

Victims of forced labour have been identified in domestic service, the restaurant industry and car washing services. Undocumented migrant workers are at higher risk of being subjected to labour trafficking.

NGOs indicate Vietnamese and Chinese men who have been prosecuted and sentenced for cannabis cultivation, and report indicators of forced labour, such as document retention, restriction of movement and non-payment of wages.