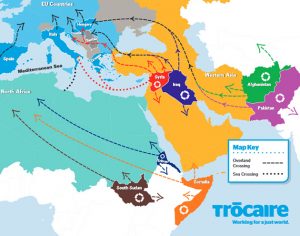 This year’s annual Trócaire lecture will focus on the issue of migration and President of the International Catholic Migration Commission, Peter Sutherland, will be the keynote speaker.

The International Catholic Migration Commission (ICMC) is a non-governmental organisation working in the area of migration and refugee assistance.

Founded in 1951, its focus initially was the massive human displacement caused by the Second World War.

Former international businessman and attorney general Peter Sutherland also acts as the UN Special Representative of the Secretary General for Migration and Development.

Appointed in January 2006, he has been responsible for the creation of the Global Forum on Migration and Development.

As President of the International Catholic Migration Commission, the organisation continues to respond to the needs of uprooted people and their communities by implementing and advocating for rights-based policies and sustainable solutions through its worldwide membership of Catholic Bishops’ Conferences, and alongside governmental and non-governmental partners.

The annual Trócaire lecture will take place in St Patrick’s College Maynooth on Thursday 19 May. The title of this year’s lecture is ‘Migration – The moral challenge of our time’.

According to Trócaire, more than 60 million people worldwide are now forcibly displaced as a result of conflict and persecution, the highest number since the mid-1990s.

Several million people remain displaced because of natural disasters, although updated statistics are not available.

More than 15 million of the uprooted are refugees who fled their home countries, while another 27 million are people who remain displaced by conflict within their own homelands – so-called ‘internally displaced people.’

Trócaire works in most of these countries.

The deaths of all migrants and refugees attempting to reach Europe by sea in 2015 now total 2,373.

The International Organisation for Migration has said that last year, from late August through the end of December, over 1,200 people  died at sea.