Home > News > Anger as psychologist likens No voters to Nazis 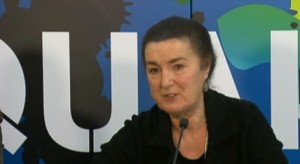 Comments made by the well-known psychologist Dr Maureen Gaffney likening No voters in the referendum on marriage to Nazis and racists have been criticised as “appalling” by a prominent psychiatrist.

Professor Patricia Casey, who is a professor of psychiatry at UCD and a consultant psychiatrist at the Mater Hospital, called for the comments to be withdrawn immediately.

Speaking at an event to promote a Yes vote, Dr Gaffney said, “In Nazi Germany, nationals with German blood were not allowed marry Jewish people. In the southern States in America until 1967, interracial marriage was banned. In apartheid South Africa, interracial marriage was banned. I’m not drawing direct comparisons, we’re far from that here, but I ask you, what is the difference excluding a whole raft of ordinary people who are gay or lesbian?”

She added, “It is just another form of the same oppression.” 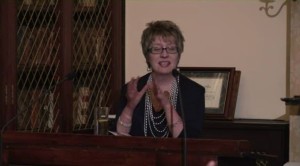 Responding, Professor Casey noted that Dr Gaffney claimed she was not making a direct comparison between No voters on the one hand, and Nazis and racists on the other, but said that is exactly what she had done.

“She puts opposition to same-sex marriage on precisely the same moral level as Nazism and racism. Her comments show a total lack of respect for those voting No,” she said.

“It shouldn’t need to be spelled out, but believing in the family of man, woman and child based on marriage is not remotely comparable to racism.”

Professor Casey questioned if Dr Gaffney was seriously suggesting that believing in the differences between men and women and mothers and fathers is the moral equivalent of racism and Nazism.

“Her comments are deeply insulting and offensive to all No voters and must be withdrawn immediately,” she stated.

Separately, on Thursday a group of teachers, parents and academics launched a new organisation calling for a No vote in the upcoming referendum.

The group ‘Educators for Conscience’ says that the proposal has serious consequences that have not been properly dealt with in the public debate.

Referring to evidence from other countries where, after the introduction of same sex marriage, teachers came under pressure to radically change their education practices, the spokesperson for the new group said, “The reality is that if this referendum passes, gender-neutral ‘marriage’ would be elevated to a new status in the Constitution, and employees of the State would be obliged to protect that new model of marriage.”

Kevin Leavy added, “As teachers, our fear is that for example, a teacher who gives preferential treatment to a view of marriage as between a man and woman over a same sex marriage will be seen to be discriminating.”

He said that the proposal if passed will change the way that sex education classes in schools would have to be taught and that teachers who do not believe that same-sex marriage is the same as marriage between a man and a woman could be accused of being “homophobic” and in breach of the Teaching Council Code of Conduct.

“We already have material being sent into primary schools with the approval of the INTO called ‘Different Families, Same Love’. Among other things this advises teachers on how to teach children in Junior Infants about transsexuality and the different varieties of adult sexual desire before they even know the basic facts of life,” he said.

“If the referendum passes, it will become more and more difficult for teachers to refuse to teach material they believe is entirely age inappropriate.”

Kevin Leavy also highlighted that, “As educators, we fully support action against bullying, teaching tolerance and respect for all people. But we believe this must be done in a manner that is fully in harmony with personal conscience, school ethos and parents’ values.”

“If the referendum is passed, far-reaching changes involved in the redefinition of marriage will create challenges for educators which, in some cases, could lead to a loss of livelihood because of disciplinary action. It is highly unlikely that school ethos will provide sufficient protection, especially for teachers paid from the public purse.”

“It is wholly unacceptable for the Government to accuse people of scaremongering for raising these entirely legitimate concerns. The Government has repeatedly refused to address any of these concerns and they are continuing to side step the issue at every turn. In fact, they have refused to consider including a conscience clause. The impact on the education system in other countries after the introduction of same sex marriage points to what would happen here.”

“Teachers, and indeed parents, have not been informed or consulted about these consequences. Accordingly, we urge parents and teachers to vote NO,” he concluded.