Angelus gathering goes ahead despite call for controls to curb coronavirus 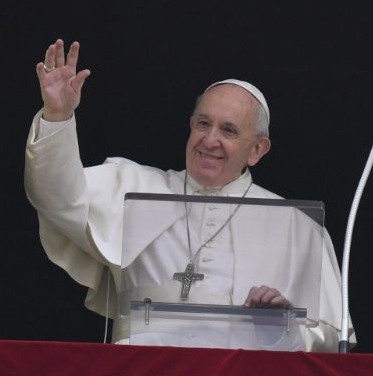 To help prevent the spread of the coronavirus that has killed more than 300 people so far, Pope Francis was asked to halt yesterday’s midday Angelus gathering, but the event went ahead with tens of thousands from across the globe crowded into St Peter’s Square.

The request was made by Codacons, one of Italy’s largest consumer rights organisations, which has made a number of public interventions in Italy about the coronavirus outbreak.

The infection originated in the port city of Wuhan in central China and was first reported on 31 December, but since then cases have been confirmed across the Asia-Pacific region, in Europe, North America and the Middle East. So far, more than 300 people have been killed by the virus, with most of the victims being older than 50 years of age.

Irish and British passengers arriving home from Wuhan have been placed in a quarantine hospital in Merseyside in the UK for the next 14 days, but in Italy there has been public alarm that recent arrivals from China are not being isolated.

“It is not enough to take the temperature of passengers and give them information leaflets. Given the long incubation times of the virus, these measures are ridiculous,” said Codacons president Carlo Rienzi.

He called on the government to suspend performances in cinemas, theatres and other gatherings until the emergency declared by the World Health Organisation is at an end. In addition to halting guided tours of popular tourist locations such as Rome’s Colosseum, Mr Rienzi called for all trains, buses and metro carriages to be disinfected before every departure.

He said: “Finally, the Church must consider whether to suspend masses and religious services, and invite the faithful to take part in celebrations, including next Sunday’s Angelus in St Peter’s Square, by staying at home and [watching events] on TV.”

Sunday’s Angelus ceremony was not cancelled, and Pope Francis spoke to an assembled crowd of thousands of people, calling on them to pray for those who are sick “because of the virus that has spread through China”.

In addition to praying for those who have died because of the outbreak, Pope Francis called for prayers to aid Chinese government efforts to limit the spread of the infection. He said: “May the Lord welcome the dead into his peace, comfort families and sustain the great commitment by the Chinese community that has already been put in place to combat the epidemic.”

Virus outbreaks have led to the cancellation of public gatherings in Ireland in the past, most recently during the 2001 Foot and Mouth outbreak.

The Italian consumer watchdog is monitoring many aspects of the coronavirus outbreak; for instance, Codacons reports that, as people rush to find whatever protection they can from coronavirus infection, there has been a 1,752 per cent increase in the price of facemasks sold on the e-commerce website Amazon.