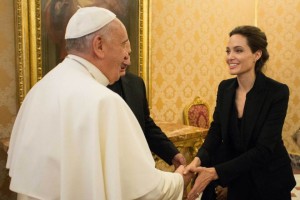 High profile American actress Angelina Jolie met Pope Francis in a private audience at the Vatican on Thursday after the screening of her new film ‘Unbroken’ at the Pontifical Academy for Sciences.

Pope Francis did not watch the film but spoke with Ms Jolie afterwards, who was accompanied by two of her children, her brother and a cast member from ‘Unbroken’. Ms Jolie directed the film.

The film recounts the story of Louis Zamperini, an Olympic track star whose B-24 bomber crashed in the Pacific during World War II.

He and two crewmates survived on a raft for 47 days, only to be captured by the Japanese.

Pope Francis didn’t watch the film, but exchanged a few words with the actress, who is a UN special envoy, afterwards when she was brought up to the Apostolic Palace to meet him.

The meeting was arranged by the Argentine head of the pontifical academy, Monsignor Marcello Sanchez Sorondo, who is a friend of the Pope’s.

In a brief and cordial greeting the Pope presented Angelina Jolie and her children with some Vatican souvenirs.

Pope Francis had just met with a delegation of visiting Yezidis in a formal audience ahead of the more informal meeting with the American actress.

The Yezidis delegation was led by the Head of all the Yezidi, Mir Tahsin Said Ali Beg, and their supreme spiritual Head, the ‘Baba Sheikh’, Sheikh Khato, both resident in Iraqi Kurdistan.

The group also comprised three representatives of the Yezidi of North Iraq, Georgia and the diaspora in Germany.

During the meeting, which lasted approximately half an hour and took place in the private library of the Apostolic Palace, the delegation thanked the Pope – indicated by one of the delegates as the “father of the poor” – for his support for the Yezidi in this time of persecution and suffering.

They informed the Pope of the situation of around 5,000 Yezidi women reduced to slavery by ISIS, and highlighted the good relations between Yezidi and Christians, emphasising their mutual solidarity.

Pope Francis assured the delegates of his spiritual closeness and his support in these challenging times, and expressed his hope that soon it will be possible to restore justice and the conditions for a free and peaceful life for the Yezidi, as well as all other minority groups who are the object of discrimination and violence.

There are around one and a half million Yezidi throughout the world, of whom half a million are in Iraq; there are others in Turkey, Georgia, Armenia, and in diaspora in many other countries.