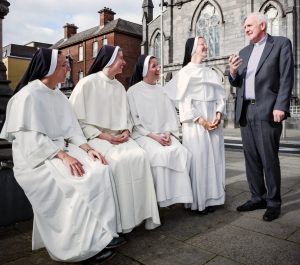 American Dominican sisters who arrived in Limerick just over a year ago say that they have had a very positive experience.

“We’ve received such a warm welcome. From the moment we landed in Shannon Airport, we’ve had nothing but goodwill.  The community here has been very good to us, particularly the religious community.  It’s really been a beautiful experience to get to know people in our own parish at St. Saviour’s but also around the diocese,” said Sr Rose Miriam.

Sr Rose Miriam is a history graduate from California Polytechnic State University,played football both in college and in school and was a Youtube hit when she played football with a community Garda, and showed her technique at the ‘keepy uppy’ move. “That, too, put a smile on everyone’s face but it’s only in keeping with what the Dominicans are doing generally for Limerick,” said Bishop Leahy.

“We enter religious life as fairly normal people. We bring with us all the normal things that make life enjoyable,” said Sr Rose. “If it’s good and true and beautiful, no matter what it is, God will use it to build up his kingdom.  For me it was football, for another person it could be a song, a poem, a dance, a painting, a piece of woodwork. It could be anything.  We all have talents and we must express them.” 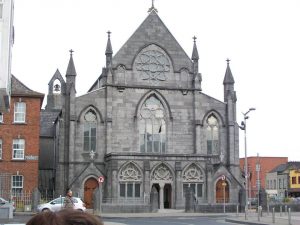 For her day job Sr Rose Miriam is a Diocesan Advisor to primary schools and she said it is an “absolute pleasure” to work with primary school children. As well as being in touch with the Catholic community, she is all too aware of the challenges that secularism is bringing to Limerick.

“There are trends to secularisation all over the western world and Ireland is no different. It’s a serious challenge and problem in society but we need to be able to answer the call to meet that challenge head on.  God is calling us to make for a new evangelisation, to find new methods in how we proclaim Jesus Christ in this modern age,” she said.

She added that there is also great faith in Limerick and the traditional devotional practices of Novena, of lighting candles, and saying the rosary and so on, are not dead.

“We do need to be intentional in passing them on in a living way to the youth,” she said. “Those practices have served people so well and they are still very noticeable.  We see people saying the Angelus, blessing themselves passing Churches.  There’s huge respect for the sacraments.”

She is one of four Dominican Sisters of St Cecilia who arrived last year from Nashville, Tennessee. They are a teaching order with schools all over the world, mostly the United States. They took over St Saviour’s Church, Limerick, from the Irish Dominican Order which was celebrating its 800th jubilee. When the Dominican friars announced that they were to move out last July, Bishop Brendan Leahy, sent out a request for Sisters in the hope that the Dominican’s presence might remain in Limerick.

Three of the Sisters are originally from Seattle, California and Kentucky and one is from Cork, although they all come via their Nashville Mother House. Sr Mara Grace, the superior of the group, told catholicireland.net at the time of their arrival: “Our mother superior was very excited to help the church in that way. The four of us arrived in August and we are working in the parish here at Sr Saviours and keeping it open and doing other work for the diocese.”

This is not the only religious community to arrive in Ireland. Last July a group of Indian Carmelite friars took over the White Abbey friary in Kildare where they plan to stay for three years. The Indian Province of the Carmelites sent a request to Rome for ministry work in English speaking countries and received an invitation from the Irish province. The Irish Carmelites who were living at the friary have transferred to Dublin and Moate so the Indian priests and brother are running the friary with the help of lay staff.