All amendments rejected in latest stage of abortion debate in Seanad 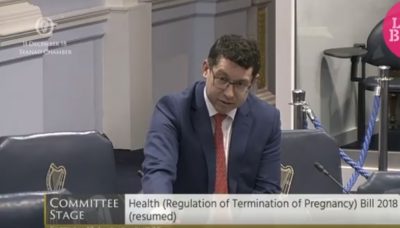 Senator Rónán Mullen in the Seanad

Senators Rónán Mullen and Brian Ó Domhnaill have expressed their sadness at the rejection of amendments that would have ensured that medical care would be given to any babies who might survive an abortion procedure.

In a statement issued on Tuesday 11 December 2018 about the Seanad Éireann debate and vote, the senators stated:

“We are deeply saddened by this evening’s vote in Seanad Éireann rejecting amendments that would have ensured that medical care be given to babies who survive the abortion procedure and requiring pain relief to be administered to unborn babies before they lose their lives in late-term abortions.”

They added that nothing in these amendments would have interfered with access to abortion under the new law.

“All the amendments sought to achieve was mercy and a modicum of respect for unborn babies in the appalling situations in which they are placed. Regrettably the Minister for Health and a majority of the Seanad refused to show compassion by supporting humane amendments that would lessen in some small way the terrible injustice at the heart of the government’s abortion bill,” they said. 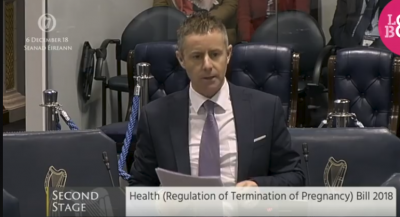 They also complained about the “sad spectacle” of the Seanad chamber emptying as soon as the amendments were introduced.

The senators asserted that the international reality is that unborn babies who survive abortion are routinely left to die alone without receiving any medical care.

They highlighted that there is mounting peer-reviewed evidence that unborn babies can feel pain from around 20 weeks gestation and possibly even earlier. They wanted the new abortion law to include pain relief for babies during late-term abortions.

“As a society and as elected representatives, we cannot hide from the inconvenient truth of what legalised abortion involves,” they stated. “There is much talk in the Seanad about social solidarity and care for the most vulnerable and defenceless in society. Things were very different this evening in the Seanad chamber.”

They thanked colleagues who did stand up for life by supporting the humane amendments that they tabled.

During the Committee Stage of the Regulation of Termination of Pregnancy Bill, which began in the Seanad on Monday 10 December and concluded after 12 hours debate on Tuesday 11 December, 63 amendments were tabled. All 63 were rejected.