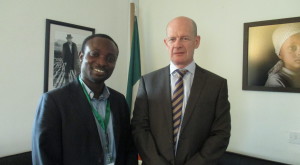 Irish missionaries have made a huge contribution to the education of the people of West Africa, according to Sean Hoy, the Irish Ambassador to Nigeria.

In comments to participants in Misean Cara’s first Education Learning Event in Lagos, Nigeria earlier this week (27 – 28 April 2015) he said he had visited missionaries who have taught in schools for over fifty years.

He noted that they had dedicated their whole lives to the education of the future leaders in Nigeria.

“I know that this contribution is cherished by the people of Nigeria throughout the country irrespective of their own religious or ethnic background,” Ambassador Hoy said.

He explained that while previously working in Mozambique and Vietnam he found that nobody in the government had ever heard of Ireland.

“In Nigeria, everybody knows Ireland. This is, in no small way, due to the sacrifice and dedication of our missionaries,” he said.

However he cautioned, “We also need to accept that what has worked well in the past will be difficult to replicate as missionary orders are able to send smaller numbers of teachers to Africa.”

“This should be seen as part of the normal cycle of development where teachers can pass on responsibility to their pupils to become the teachers of tomorrow.”

He wished the participants well in their discussions during the event which focused on Misean Cara funded education projects in Nigeria.

Participants discussed the role of partnerships/networks and collaboration in strengthening the sustainability and scalability of Misean Cara Education Projects in Nigeria. 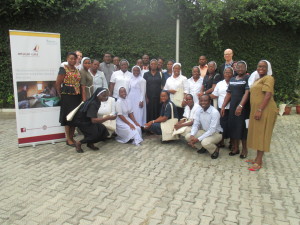 They are based across Nigeria and had already evaluated their education projects, and shared some of the highlights of their work.

The emphasis was on learning, and one of the panelists Dr Mo Adefeso-Olateju, Managing Director at the Education Partnership Centre (TEP Centre) discussed multi-sectoral partnership programmes in education in Nigeria, and what opportunities these present for Misean Cara members.

Education is the biggest sector recipient of Misean Cara funding, and last year the organisation allocated €7,007,587 amounting to 49% of total funding.

Misean Cara emphasises that education has the ability to transform the lives of the marginalised, and most vulnerable people in some of the poorest countries in the world.

In countries like Nigeria, this work is making an essential contribution through access to education in the eradication of poverty.

Progress has been made in Nigeria increasing student enrolment in primary education, up from 62% in 2008 to 70% in 2012.

Nigeria has the world’s largest number of children out of school.