Concern over increased spending on alcohol 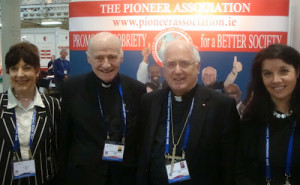 It is the highest amount since 2008 and far outweighs the spend on clothes.

According to Bobby Smyth of Alcohol Action Ireland the figures underline the “urgent” need for a comprehensive alcohol strategy to be implemented.

He also highlighted that in Ireland the average drinker is consuming the equivalent of a bottle of whiskey per week every week of the year, which he said was obviously “an unhealthy amount of alcohol to be consuming by any international health standards.”

Fr Barney McGuckian, SJ, spiritual director of the Pioneer Association, said this amounted to over fifty bottles of whiskey a year. “It is a big big spend,” he commented and admitted he was shocked.

Speaking about next month’s two-day Pioneer national conference at All Hallows College in Dublin, he told CatholicIreland.net that the theme was, ‘The Spirit that Sets Us Free – Overcoming Addiction’.

The line of speakers includes Fr McGuckian and his fellow Jesuit and campaigner on homelessness, Fr Peter McVerry, as well as addiction counsellor, Majella Coyle. Archbishop Diarmuid Martin of Dublin will celebrate the closing Mass on Sunday 29th September.

The Pioneer Association was founded 125 years ago by Fr James Cullen, SJ in the Church of St Francis Xavier, Gardiner Street, Dublin. The conference is part of the Association’s anniversary celebrations.

Meanwhile, a major Pan African Congress of Pioneers is taking place this week in the Kenyan capital of Nairobi.

The Pioneer Association describes itself as “a spiritual, prayer-based organisation founded to help address the problems in society caused by alcohol and drug abuse.”

Its aim is to promote the virtue of temperance. Pioneers work towards achieving this aim primarily though “faith and prayer, self-denial leading to inner-freedom, setting a beneficial example to others and presenting alternatives to individuals, particularly the young.”