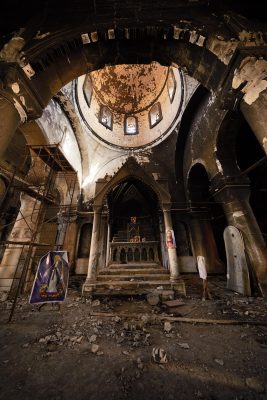 The Great Al-Tahira Church in Baghdeda, Iraq. Destroyed by Daesh, due to be restored by ACN (Pic: Jako Klamer/ACN)

Efforts to maintain a Christian community in Iraq have been given a major boost by Aid to the Church in Need (ACN), which has committed to restoring 14 churches desecrated by followers of the Islamic State of Iraq and Syria (ISIS), also known as Daesh.

Since the outbreak of the Syrian Civil War in 2011, Christian communities, Baha’i communities and Shia Muslim communities have been attacked by Daesh, who have destroyed any places of faith that do not belong to a very orthodox Sunni Muslim tradition.

The Christian communities on the plains of Nineveh, near Mosul, on the left bank of the River Tigris, have been especially targeted.

The Syriac Catholic Archbishop of Mosul, Petros Mouche, thanked ACN for its commitment to repair the Great Al-Tahira Church in Qaraqosh (or Baghdeda), which is the largest Christian town on the Nineveh Plains.

“For us, it is a symbol,” said Archbishop Mouche. “This church was built in 1932, and it was the villagers of Baghdeda who constructed it.

“For this reason, we want this symbol to remain as a Christian symbol to encourage the people, especially the locals of Baghdeda, to stay here.

“This is our country, and this is a witness that we can give for Christ.”

ACN has also approved 13 other projects to rebuild church properties across the region – all of them damaged and desecrated by Daesh militants.

In addition to restoring churches, ACN has committed to reconstructing public meeting facilities in Bashiqa, a town occupied by both Christians and Yazidis, two minority communities targeted by Daesh. Restoring the Najem Al-Mashrik Hall and the Bashiqua Theatre will give the town’s people a venue for wedding ceremonies and other celebrations.

“This project will help ensure the survival of Christian families and provide them with important services,” says Father Daniel Behnam. “In particular, it will help young people, providing a space for pastoral, cultural and youth activities.”

This latest tranche of ACN aid builds on the charity’s “Return to the Roots” programme to enable Christians to return to Nineveh following the defeat of ISIS. Central to the initiative is the repair of homes damaged by Daesh – of which 37 per cent were restored by ACN.

Christians in Iraq, who numbered 1.5 million before 2003, have declined by 90 per cent within a generation. Of the 120,000 Christians who fled the Nineveh Plains following the Daesh invasion in 2014, more than 45,000 have since returned home.

ACN relies on the generosity of its supporters in countries like Ireland, where the Church is not under threat.

Archbishop Mouche said: “I would like to take advantage of this occasion to thank all the people who help, as these organisations can’t help us without the support of their benefactors.”